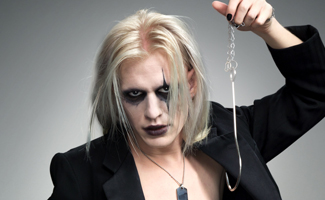 Freakshow‘s Morgue is one of the world’s premiere shock artists. In this interview with AMC, he talks about his most dangerous stunts and the best audience reaction he’s ever received.

Q: What was the first stunt that you learned to perform as a shock artist?

A: The first weird stunt I learned, when I was like 11 or 12, was putting razor blades in my mouth. I would put a length of string in my mouth, as well, and then tie them together through the holes in the razor blades. But I didn’t really start doing shocking public performances until  three or four years ago.

Q: How did you come to join the Venice Beach Freakshow?

A: Eventually, I got into street performing. I started out on the Huntington Beach Pier in Orange County. Then moved all over California. Because my street performances are very shocking, I got arrested in Hollywood. I got banned from the Santa Monica Promenade. I never got banned from Venice Beach, but I did have quite a few visits from police. So eventually, word about me got to Todd. He became interested because I do stunts that other performers don’t. So he contacted me, and we got to talking for a while. I started out as a guest performer there, and he was so happy, I eventually became a featured act.

Q: All of your stunts are self-taught. Have you ever had to stop practicing a stunt because it was too dangerous?

A: I’ve never stopped practicing a stunt, but I’ve had a lot of injuries. Particularly with my regurgitation stunt. That one was probably the most dangerous. I actually had to drive myself to the emergency room when I was first learning that stunt. Something got lodged inside of me and I couldn’t get it back out. I started coughing up blood. It took like eight hours at the hospital, they had to call in a specialist and put me under. Crazy. So that was probably the scariest thing that’s happened so far, but not to the point where I wouldn’t do it anymore. Certain stunts, like the ones that deal with needles — the pin cushion — are very, very dangerous. Since I am self-taught, what I would do is before I practiced these things, on my cellphone I would type in “911,” but I wouldn’t send. So if something went wrong while practicing, I would have it there and all I’d have to do is just hit the send button. Luckily, I’ve never had to do that. But that’s my safety net.

VIDEO: Who is Morgue?

Q: In Episode 2, you help Asia learn how to swallow a sword. Was that the first time you taught someone else?

A: Yes. I wouldn’t teach that stunt to just anyone. But Asia is different. I like the way she approaches performance. Some people just do these things to sort of show off. Like, “Oh look at me! Look what I can do!” Then other people do it as an expression of themselves, really, as art. And Asia has that. That’s why I wanted to teach her, because she was learning it for the right reasons.

Q: Which of your stunts are you the most proud of?

A: If I had to pick, I’d say the one where I put the hook in through my nasal passage and back out my mouth. I like that one very much, because it gives a grotesque image of the human anatomy for people to look at. People always try to look at the pretty side of things.

Q: Would you also say that’s your favorite stunt to perform?

A: For entertainment, it’s the hook one. But, personally, I really like the pin cushion act, where I bleed. That one is the most important to me as an artist. I don’t really perform that very often. But when I do, it’s more for myself. It’s not really as an entertainment piece. I get a lot from doing the needles, so I only do that when I feel I need to experience that.

Q: What is the experience you have when you’re doing the pin cushion act?

A: It is a difficult thing to explain. It’s sort of transcendent experience where you have all of these emotions going on at the same time. You have the extreme pain. Then there’s also being on stage in front of a crowd. To say it’s an adrenaline rush doesn’t really do it justice. It’s sort of experiencing a different state of being.

Q: What’s the most memorable reaction that people have had to your act at the Freakshow?

A: During one performance of the pin cushion act, I had about six or seven people in the audience faint. It was quite a lot. Poor Danielle had her hands full trying to revive everybody. That was probably my favorite reaction. But I’ve had people throw up, run away screaming [Laughs]. Although, I always enjoy when people compliment the presentation, aside from just the stunts. I like when people appreciate the other aspects of the performances.

Q: On that note, which performers (stunt or otherwise) do you admire most and why?

A: They aren’t really performers, but there are people that I get influence from: I admire Neitzsche, Socrates, Sartre. But I guess if I thought about, say, music performers, I definitely like Marilyn Manson, Ozzy Osborne, Alice Cooper, Rob Zombie, all the good shock rockers. They are able to be exactly who they are without being afraid of others’ opinions. There are other people who are themselves and aren’t shocking, and I admire them too. It’s just when you’re willing to do something that isn’t widely accepted, it takes a certain amount of courage to be able to put yourself out there like that. Not be afraid of the consequences from the public. That’s something I respect.