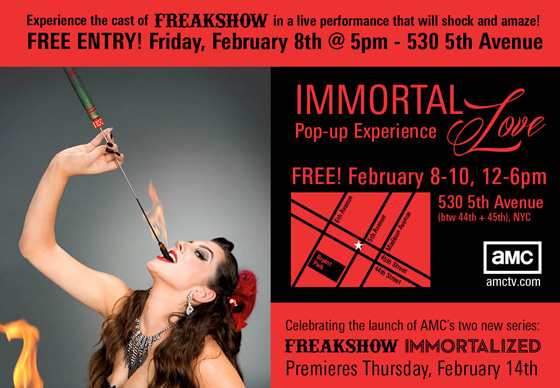 Going to be in NYC this weekend? Then come help AMC celebrate the launch of two new series, Immortalized and Freakshow, by visiting the Immortal Love Pop-up Experience.

• Two art galleries featuring amazing taxidermy (both traditional and “rogue”), including works created by the Immortalizers from AMC’s Immortalized.

• A Freakshow lounge with some of the Venice Beach Freakshow owner’s sideshow collectibles, some funhouse mirrors and an episode from the series on monitors under an octopus chandelier.

• Thu., Feb. 7 at 7PM: Opening night celebration with the casts of both series and a haute couture fashion show by fashion designer Cesar Galindo with hats by Immortalizer Beth Beverly. Click here for ticket information from Time Out New York. AMC will live-tweet video and photos from @FreakshowAMC and @ImmortalizedAMC.

• NOTE: Due to the inclement weather, the performance by the cast of AMC’s Freakshow originally scheduled for Fri., Feb. 8 at 5PM has been cancelled.