Monsters have gone through quite the evolution over the centuries. What the word “monster” conjures is something different for each of us. From Dracula to Mike Wazowski in Monsters Inc., the trope has been thoroughly explored and iterated upon in books, on screen, and even in our own imaginations. Most of us are taught from a young age that monsters are just that, a figment of our imagination. But history and an interest in monsters from the world of academia point to these entities having much deeper roots. Research that asks “What is a Monster?” from the University of Cambridge, or An Exhibition of Monsters and the Wonders of Human Imagination from the University of Toronto, speak to our continued interest in the origins of these entities.

At their core, monsters defy what we believe to be possible within our world. Death, nature, science, religion, and war have all played their part in the development of the monsters we know and love/fear today. In this month’s installment of AMC’s Book Club, we’re looking at stories that center around monsters, and digging into their intriguing origin stories. 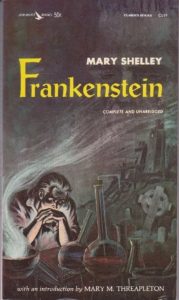 The classic novel, written by Mary Shelley, has a long history in its own right. It was written by a woman in 1818, and today in the Western world is definitely one of the most widely known monsters. There are some differences in how the story was told between the 1818 and 1831 versions, but the moral of the story might as well be etched into stone.

When a scientist named Victor Frankenstein becomes interested in chemistry, he eventually becomes fixated on finding a way to bring inanimate objects to life. His passion brings him to the creation of Frankenstein, a being that was not born, but created. One of they key differences between the original version of the story, written in 1818, and the third version written in 1831, is that by the third Mary Shelley gives the reader insight into how Victor created Frankenstein. In her telling of this part of the story, she refers to Frankenstein having been galvanized—subjecting an object to electric current, especially for the purpose of stimulating physiologically.

The word galvanize originates from the scientist Luigi Galvani who was a pioneer in bioelectromagnetics. A modern utilization of this work would be how radiotherapy is leveraged in the fight against cancer. However, back in the late 1700s when Galvani was just beginning to explore how electromagnetic fields impacted biological entities, major discoveries included finding that the muscles of dead frogs’ legs would twitch if struck by electrical sparks. 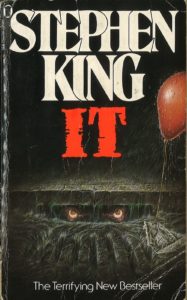 The 1986 horror novel from none other than Stephen King takes great inspiration from one of the most popular monsters to fear: the clown. The award-winning book follows seven children who are preyed upon by an evil entity that typically presents itself as Pennywise the Dancing Clown. It hibernates for long periods of time, and emerges for a brief period to kill children, shapeshifting into the thing that the child fears the most. Pretty f***ed up, right? Then again we are talking about Stephen King. The clown has become so synonymous with fear, that we often forget to ask ourselves how this even came to be.

In many cultures the clown existed to entertain the rich and the royal. Hieroglyphics dating back as far as 2500 BCE depict Pygmy clowns making pharaohs laugh. Eventually in 1500, Shakespeare would call the foolish characters in his plays ‘clowns.’ These characters would appear as bumbling buffoons, a sort of silly self-deprecation that allowed them to get away with poking fun at Emperors and Kings for the sake of entertainment.

There’s no way of telling exactly when our view of clowns began to pivot to evil, but a man named Jean-Gaspard Deburau may be a solid starting point. The man who became known as Pierrot was an insanely popular clown in Paris in the 1800s. While he was ultimately acquitted, he killed a boy for insulting him while walking by on the street. Sounds like a likely ancestor of Pennywise, no?

Watch: Stephen King on How He Generates New Ideas 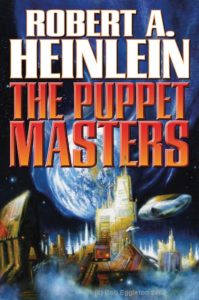 Is there anything scarier than aliens invading, controlling human bodies by taking control of their nervous systems, and essentially using them as puppets to continue their invasion? The answer is N-O, NO. Robert A. Heinlein’s 1952 novel takes place in 2007 as the world is rebuilding following a nuclear war between the Soviet Union and Western Bloc. After a number of government agents go missing and almost all of Des Moines, Iowa is taken over, the United States government acknowledges the threat of “slugs.” These alien invaders act as parasites, entering their victims’ bodies to do what they want with them. This book became the underlying inspiration for many titles to come, including Star Trek and the Alien franchise.

The idea of an alien laying eggs within a person through their mouth is hard to look past, especially when you think about the fact that that inspiration comes from nature. Specifically, phronima, a species that lives deep in the ocean (thank god). It kills salps, an invertebrate animal, by laying its eggs within its hollowed out body. But phronimas are not just killing machines trying to take over like its alien-counterparts are portrayed. This act allows them to provide its offspring with fresh food and water as it develops. Yuck.

The Science of Monsters: The Origins of the Creatures We Love to Fear 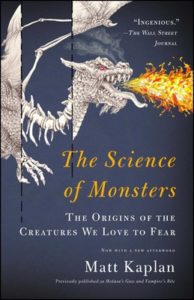 This one cuts right to the chase. Asking whether certain monsters really exist, to why we’re so drawn to them, this book answers burning questions about legendary creatures and characters we’ve come to know as Monsters. And this isn’t just some random person spinning hypotheticals. Matt Kaplan, the author of the book, is a science journalist and lover of lore who brings cutting-edge research to what we often consider a mystical topic.

We’re not sure if it’s more intriguing or unsettling to know that monsters are not entirely made up after all. Regardless of the camp that you fall in, if we’ve learned one thing, it’s to know where our monsters came from. For more of that, check out a teaser for Season 2 of Eli Roth’s History of Horror, and don’t miss the premiere October 10th 10/9c on AMC.

This year’s library of spooky selections features 91 titles (see the full list here), including horror franchises such as Halloween, Friday the 13th, The Amityville Horror, Final Destination, Children of the Corn, Insidious, and many more.

Up Next: 7 Terrifying Trailers That Might Take Years Off Your Life

True Stories Behind Famous Haunted and Horrifying Houses From Hell