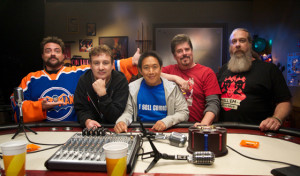 This week, Comic Book Men has been renewed for another season, according to The Hollywood Reporter, while the unscripted series is also getting a companion show. Plus, an update on the making-of Clerks movie that will feature a Kevin Smith cameo. Read on for more:

• The Hollywood Reporter reports that Comic Book Men has been renewed for Season 4.

• Flickering Myth has an update on the crowdfunding campaign for Shooting Clerks, a story about the making of Kevin Smith’s Clerks, as well as a sample scene from the movie.

• Centraljersey.com has the news that Mike and Ming will judge the Sunday Cosplay Contest at Asbury Park Comicon next month.

• For recaps of Season 3, Episode 15, “Certified Guaranty,” check out ComicBook.com and Graphic Policy.