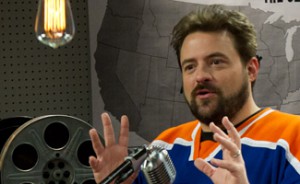 This week, The Dissolve takes an in-depth look at Kevin Smith’s career as a director, while Open Culture checks out a short that Smith made as a student. Plus, Smith was in Sun Valley to celebrate Clerks. Read on for more:

• The Dissolve takes a look at Kevin Smith’s movie career through the lens of Clerks and Mallrats.

• Open Culture spotlights Kevin Smith’s first movie, Mae Day: The Crumbling of a Documentary, describing it as “short but talkative, jocular, by turns placid and vitriolic.”

• At the Sun Valley Film Festival, which celebrated Clerks‘ 20th anniversary, Kevin Smith tells Idaho’s KMVT that the movie “inspires you to try it yourself and what better way to kind of disseminate that message than at a film festival.”

• For a recap of Season 3, Episode 14, “Batcycle on Broad,” check out Graphic Policy.