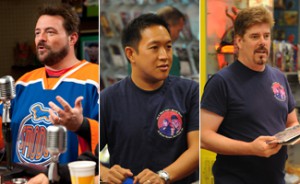 This week, Unleash the Fanboy chats with Mike Zapcic and Ming Chen, while Sundance is commemorating the 20th anniversary of Clerks and Kevin Smith will be there. Plus, the Comic Book Men crew will be at next year’s Niagara Falls Comic Con. Read on for more:

• Mike Zapcic teases to Unleash the Fanboy that the rest of Season 3 will feature cosplay from Walt Flanagan (“who said he’d never cosplay”) and “an actual super guest star.”

• Talking to Unleash the Fanboy, Ming Chen says driving the Batmobile in Season 1’s Life After Clerks was “fun” and he’s relieved he didn’t crash it.

• Entertainment Weekly says Kevin Smith will be at next month’s Sundance to mark the 20th anniversary of Clerks.

• The Comic Book Men cast will appear at the Niagara Falls Comic Con in June 2014, according to the Toronto Sun.

• Deadline reports that Kevin Smith’s Tusk has been acquired by A24 and Demarest Films and will be released in the third quarter of 2014.

• Meanwhile, ComicBook.com has an account of Kevin Smith chatting with Arsenio Hall about the genesis of Tusk.