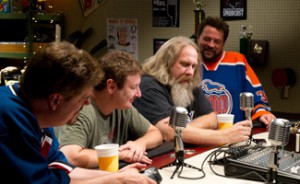 This week, the Comic Book Men cast chats with The Star-Ledger, while Kevin Smith hosts a Superman-related fan event. Plus, Walt Flanagan chats with Big Shiny Robot. Read on for more:

• The Star-Ledger talks to the Comic Book Men to figure out what goes on at Jay and Silent Bob’s Secret Stash, “one of America’s most recognizable comic book shops.”

• Access Hollywood and ScreenCrush have accounts of a fan event hosted by Kevin Smith that featured some intel on the tentatively-titled Batman vs. Superman. ComicBookMovie.com has a video of the Q&A fan event, which featured Zack Snyder, Amy Adams and Henry Cavill.

• TheWrap previews “Pity the Fools,” which features Kevin Smith reminiscing about a PSA with singing drugs.

• Hypable has a sneak peek of two photos from “Pity the Fools.”

• According to TheWrap, Kevin Smith says in the Hollywood Babble-On podcast that he got a look at the Batsuit that Ben Affleck will wear in the Man of Steel sequel and it’s “mind-bending.”

• For a recap of Season 3, Episode 5, “Pity the Fools,” check out ComicBook.com.