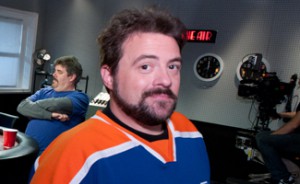 This week, ComicBook.com previews the latest episode of Comic Book Men. Plus, Kevin Smith shares details from his new film, Tusk. Read on for more:

• ComicBook.com has an exclusive clip from “Walt’s Big Gamble,” while Comic Book Movie features photos from the same episode.

• Dread Central highlights a photo shared by Kevin Smith from the set of his upcoming film, Tusk.

• ComicBook.com reports that the man who provided the inspiration for Tusk has been made a producer on the film by Kevin Smith.

• According to Bloody Disgusting, Kevin Smith tweeted a photo of the walrus creature diagram from the set of Tusk, which wraps production this week.