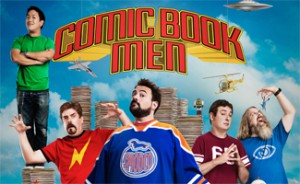 This week, the Comic Book Men answer Yahoo TV’s questions, while Make Zapcic appears on Talking Dead. Plus, Ming Chen chats about playing a priest in a movie. Read on for more:

• Comic Book Men’s cast answers a POPsessions questionnaire from Yahoo TV, which also shares five things you may not have known about the show’s stars.

• In a crossover appearance, Mike Zapcic shows up on last week’s Talking Dead to ask a question about The Walking Dead’s Carol and Bob.