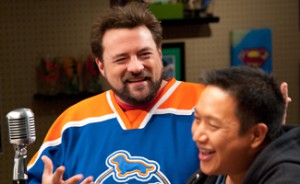 This week, in the Season 3 premiere, Kevin Smith shares his enthusiasm for Ben Affleck as Batman, while Lou Ferrigno worries about Bryan Johnson’s weight. Plus, Smith writes in The Hollywood Reporter about the saga behind his horror film, Tusk. Read on for more:

• USA Today features a Comic Book Men Season 3 premiere clip where Kevin Smith is effusive in his enthusiasm for Ben Affleck’s casting as the newest Batman.

• Comic Book Movie showcases a clip from the Oct. 13 Season 3 premiere where Lou Ferrigno counsels Bryan Johnson about his weight.

• Kevin Smith writes in The Hollywood Reporter about the making of Tusk, a horror film based on a (fake) ad on a British website.

• In another guest column in The Hollywood Reporter, Kevin Smith details how he’s shepherded Tusk to the point where shooting will start next month in North Carolina.

• Cryptozoic Man, a new comic from Walt Flanagan and Bryan Johnson, is available in stores on Oct. 9, according to ComicBook.com.