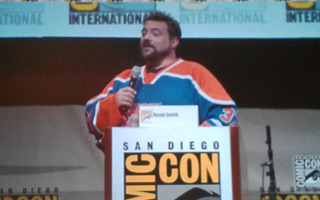 Returning to Comic-Con, filmmaker-podcaster Kevin Smith hosted his two-hour “ComiKev 2013” session Saturday night to full capacity. Presiding over 7,000 fans, Smith walked out onto the stage alone, in command of the entire audience. Soft-spoken and humble, this independent filmmaker has nearly 2.5 million followers on Twitter, a podcasting network, a series of celebrated films and AMC’s Comic Book Men.

Smith touched on all subjects throughout the panel, including filmmaking and Comic Book Men — from which he showed a blooper real of the series’ hilarious podcasts, which feature Smith and cast members Walt Flanagan, Michael Zapcic, Bryan Johnson and Ming Chen discussing everything and anything. Givings fans a chance to look behind the scenes at the experience of the series was a perfect reinforcement of Smith’s mantra for ComiKev 2013: make art with your friends that you want to see, share that content with the world because you can, inspire others to do the same.

Starting the panel off with a hilarious story about defending his tiny dachshund with a deflated pool toy from an owl attack, Smith quickly turned to the audience members to see what this panel would be about, tailoring his responses around news announcements, clips and anecdotes that all connected into his grand inspirational message of creativity.

After previously declaring himself done with filmmaking, Smith announced on Twitter days before Comic-Con that he will, in fact, be directing Clerks 3, with all the original cast members and production team returning. Naturally, his crowd of followers was ready for more information, and Smith discussed the evolution of Clerks as “seeing his friends on the silver screen” and watching them change from a twenties to thirties to forties versions of themselves. It was clear how personal the Clerks films are for him as he talked about issues Clerks 3 would address: growing older, marriage, children.

But that wasn’t all he had to say regarding Clerks characters. In a story about bonding with his daughter over the iOS game Plants vs. Zombies, he mentioned that he’d been approached by its developer PopCap to bring Jay and Silent Bob into the all-ages Plants vs. Zombies universe. The lights were dimmed and the audience was treated to several animated shorts with the View Askewverse characters defending their homes and snootchie-bootchies from the invading zombie horde with the game’s pea-shooting flowers.

The next topic was freeing yourself from creative blocks, with Smith talking about stepping away from the stresses of trying to find production funds for Clerks 3 — only to find himself obsessing about a bizarre news story about a man renting a free room in exchange for dressing up in walrus suit. Yes, really. Smith related how he couldn’t shake the story, and instead of waiting around for Clerks 3‘s funding, he went ahead and scripted a new feature film based on the story (now called Tusk). Upon finishing, the funding for Clerks 3 came in, and now Smith is directing two films back to back “like J.J. Abrams.”

Additionally, Smith has set up a new venture called Kevin Smith Movie Club, which promotes independent and low-budget films he believes the world needs to see. The first of these is an intense found-footage style film about high-school bullying called The Dirties. The trailer for the film was shown, which ended with the audience’s brief stunned silence, followed by massive applause.

As the Q&A session came to a close, a young couple approached the mic, as the boyfriend asked Smith for relationship advice while his shy girlfriend squirmed. After Smith gave some nurturing have-no-fear advice, the young fellow turned to his lady and proposed to a cheering hall (she said yes).

All in all, ComiKev 2013 was a massive event centered around a tiny idea: a creator connecting on a personal level directly with his fans by encouraging them to be fearlessly creative. Clearly this is Smith’s greatest talent, judging by the glowing admiration and gratitude everyone who stepped up to the microphone expressed. Comic-Con warned attendees of ComiKev 2013’s off-color language and dirty humor — but it was more of a love-fest between creator and audience that shows no signs of slowing down.