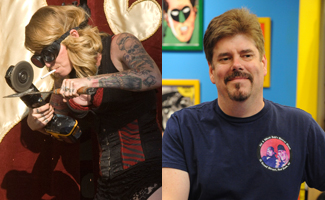 This week, members of the Freakshow cast perform on The Steve Harvey Show, and two of the Comic Book Men are featured on a Men’s Health podcast. Plus, The Huffington Post learns about Todd Ray’s newest five-legged animal friend. Read on for more:

• Freakshow’s Todd, Danielle, Asia, Brianna and Morgue appear on the The Steve Harvey Show, where they perform sword-swallowing, among other stunts.

• Men’s Health chats with Comic Book Men‘s Walt Flanagan and Bryan Johnson, who have “an encyclopedic knowledge of every comic book known to man.”

• Freakshow‘s Todd Ray chats with The Huffington Post about the newest addition to his collection of creatures: a five-legged frog.

• The Chicago Tribune names Kevin Smith as one of 12 “Tweet-worthy” directors, praising his “unique brand of commentary on all things Hollywood — and hockey.”

• The Seattle Times includes Freakshow in its Thursday TV picks, asking, “What series has a cast that includes a sword swallower, a body-modification artist, ‘The Tallest American’ and a shock artist?”

• You can catch Freakshow‘s Murrugun “The Mystic” at this weekend’s Spring Busker Festival in San Diego, reports The San Diego Union-Tribune.

• The Express-Times reports that Comic Book Men‘s Ming Chen and Michael Zapcic will appear at Parafest 2013 this September in Bethlehem, Pa.