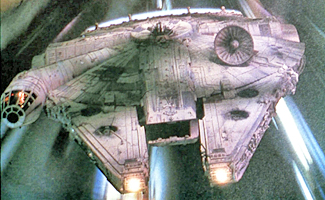 During Comic Book Men Season 2 Episode 14, “Cryptozoic Men,” Walt buys a 70 lb. Millennium Falcon model for $1,300 (and notes that purchases over $1000 are a rarity for the Stash). After learning about the large transaction, Kevin opines that the Batmobile and the Falcon stand atop the pop-culture vehicle pantheon, and also acknowledges some of the other classic vehicles that deserve inclusion in the conversation, including Battlestar Galactica’s Galactica and Star Trek‘s U.S.S. Enterprise. Which pop-culture vehicle is your favorite? Vote now.