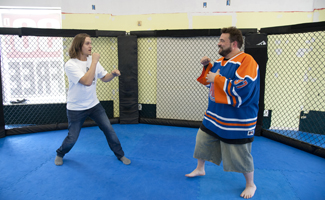 During Season 2, Episode 9 of Comic Book Men, “The Clash at the Stash,” Walt strikes a barter deal with retired MMA fighter Nate Quarry: The Stash will sell Nate’s independent comic book, Zombie Cage Fighter, if Nate arranges an MMA fight featuring fighters in character costumes. The two characters Walt picks to battle it out? Jay and Silent Bob, a choice which delights Kevin Smith and Jason Mewes, both of whom are on hand for the fight. “It was surreal seeing an in-shape, tough version of me,” Kevin jokes. “Jay” ends up winning the MMA fighter edition of the brawl, but if the characters Jay and Silent Bob ever squared off in the octagon, who do you think would win? Vote now.