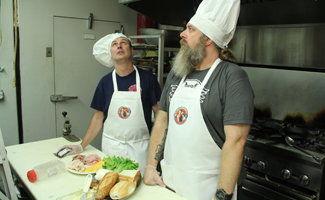 During Season 2 Episode 10 of Comic Book Men, “Super Hoagie,” the boys from the Stash split up into two teams to create original sandwiches, with the winning creation becoming the official Secret Stash Super-Hero Sandwich at Readie’s, a local cafe. Michael (a former chef) and Ming came up with a simple sandwich, while Bryan and Walt built a sandwich that’s absolutely bursting with ingredients. The manager of Readie’s has made his choice, but which do you prefer? Vote now.