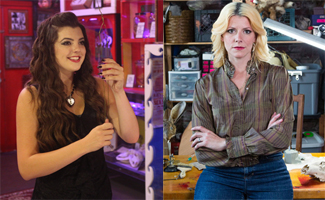 This week, The Huffington Post profiles Freakshow‘s Asia Ray and reports on a panel featuring Comic Book Men‘s Kevin Smith, and the Chicago Tribune talks to Immortalized‘s Beth Beverly. Plus, members of the Freakshow cast make an appearance on Good Day L.A. Read on for more:

• The Chicago Tribune interviews Immortalized‘s Beth Beverly as part of an article about vintage taxidermy (which is “seeing a renaissance as hip decor”).

• The Huffington Post, LAist and Los Angeles report on a panel about the “Future of Online Television” that featured Comic Book Men‘s Kevin Smith.

• Asia Ray and some other cast members from Freakshow make an appearance on Good Day L.A. to mark Sword Swallowers Day.

• TVLine says Freakshow‘s Asia Ray “isn’t content to just hang from hooks. She has something — gulp — even more lethal that she’s dying to incorporate into her act!”

• 34th Street Magazine talks to Beth Beverly about how she caught the attention of the developers of Immortalized at AMC.

• The Asbury Park Press looks ahead to next month’s Asbury Park Comic Con and highlights the involvement of several members of the Comic Book Men cast.

• For a recap of Freakshow Season 1, Episode 2, “Swords a Plenty,” check out Starcasm.