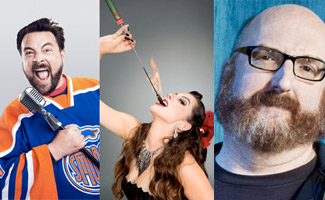 This week, The New York Times and The Associated Press both check out Freakshow and Immortalized. Plus, Kevin Smith sits down with Carson Daly, and Immortalized‘s Brian Posehn visits Conan O’Brien. Read on for more:

• The New York Times previews Freakshow and Immortalized, noting that the shows “may be landing at just the right time.”

• The Associated Press takes a look at Freakshow and Immortalized, noting the former “celebrates people who are even odder than most” and calling the latter “a wondrously odd competition show.”

• Kevin Smith visits Last Call with Carson Daly to discuss the genesis of Comic Book Men and the diversity of his career.

• Brian Posehn describes Immortalized to Conan O’Brien on Conan as the “Iron Chef of taxidermy.”

• Time interviews Paul Rhymer, who praises Immortalized because it “doesn’t treat taxidermy as an icky, morbid, red-necky kind of thing.”

• Bleacher Report chats with Nate Quarry about his appearance in the midseason premiere of Comic Book Men.

• The Huffington Post calls Freakshow “a new spin on the family drama.”

• The Kansas City Star profiles Freakshow‘s proprietor, Todd Ray, who says, “What you will see on this television show you will talk about until the day you die.” (No link.)

• BuzzFeed takes a look at some of Freakshow‘s animal denizens.

• Entertainment Tonight introduces the world to Page Nethercutt, who’s been a taxidermist since he was eight years old.

• Channel Guide Magazine chats with Beth Beverly about what it means to be a “rogue taxidermist.”

• Hollywood.com features a gallery of four Immortalized taxidermists and their work.

• CultureMap Houston writes about the intersection of Cesar Galindo’s latest collection with Immortalized and Freakshow.

• For a recap of Comic Book Men Season 2 Episode 9, “The Clash at the Stash,” check out ComicBook.com.