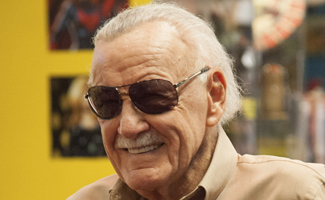 In this interview with Comic Book Men fans, former chairman of Marvel Comics and comic book legend Stan Lee talks about which of his characters he identifies with most and the strangest items he’s ever signed.

Q: Do you collect comic books? If so, how many do you have in your collection (and how many Spider-Man #1s do you own)? — Bret P.

A: His question breaks my heart, because I have not collected them. I do not collect them. I was too dumb to collect them. In fact, doing these books, most of the guys never collected them because we never thought they’d be worth anything. So, I have no collection at all. By the time I realized it, it was too late to start collecting them. It was the same with the artwork. We would give the original artwork away because we didn’t have room to store it up in the office. We never thought that people would want to buy it one day.

Q: Which of the superheroes you’ve created do you identify the most with? — Patrick P.

A: I guess Iron Man because we’re both so rich and glamorous and handsome and intelligent. But if you want a truthful answer, it’s probably Peter Parker because he’s just an ordinary guy. And underneath all this wonderful exterior, I’m just an ordinary guy. He had so many problems and nothing ever worked out perfectly for him. He was always in some sort of trouble. Yeah, I could feel for old Peter.

Q: What career do you think you might have ended up in if you hadn’t worked in the comic industry? — Christine S.

A: Hmm, well that’s an interesting question. I would’ve tried to get a job writing something. When I was young, I never particularly wanted to write comics. I just accidentally got into comics. I would’ve tried to write a novel, I guess. Or a screenplay, or something like that. I always felt that writing was the most fun you could have. I remember when I was young and I was just starting in comics, we lived in a house on Long Island. There was a tiny little shack on the property, and some friends of mine and I used to go in there and we made a show called “Story Man.” I was Story Man, and they would record me telling little stories that I made up. Nothing ever came of it, but it was a lot of fun.

Q: Out of all the characters you’ve created or written for that have not appeared in a movie to date, which one would you most like to see on the big screen? (For me, it has to be Doctor Strange.) — RiddleMeThis

A: Well, I was just about to say that. Doctor Strange is the most different of the others, and I like variety. He’s a magician, he’s got magical powers and he goes to other dimensions. He’s not just stuck here in our world. He can be almost anywhere. I think of all these characters, his might be one of the most imaginative. Also, Black Panther. Maybe The Inhumans. I’d like to see all of them, actually.

Q: What’s the strangest piece of merchandise featuring one of your iconic characters that you have ever seen or been asked to sign? — Dan H.

Q: If all of today’s technology had existed when you first started creating characters, do you think any of them would have been very different, or perhaps never have existed at all? — Rand

A: I think they’d have probably been pretty much the same because I didn’t base any of the characters on specific technologies. The Hulk became the Hulk because he got hit by a gamma ray. And the Fantastic Four became the Fantastic Four because of cosmic rays, and there are cosmic rays now the way there were then. And, let’s see, the Spider-Man was bitten by a radioactive spider. That could happen today as well as years ago. And the X-Men, they were just born as mutants. They could’ve been born any time at all. So I wouldn’t have particularly changed anything.

Q: As a comic fan who’s also an English teacher, I would love to know what works of literature were the most influential for you? Was there a particular book that informed the creation of any comic book characters you worked on? — Forrest

A: No, I don’t think so. I read a lot and it all sort of homogenized in my brain. I read a lot of Jules Verne and Sir Arthur Conan Doyle, Mark Twain and Edgar Allan Poe. Anything I could lay my hands on that was interesting. Edgar Rice Burroughs. I liked things that were a little bit bigger than life, or that were very clever. Like Sherlock Holmes, I loved Sherlock Holmes. And I read legends — I read The Odyssey. Anything, as I say, that was bigger than life and high concept.

Q: How saddened are you when you see so many people neglect the hyphen in Spider-Man? — Jamie W.

A: Oh, that’s get me angry! It’s gotta have a hyphen, because that’s the way I stated it. And also, it makes it look very different from Superman, which doesn’t have a hyphen. It should be a capital “S” and a capital “M.” If I don’t see it done that way, it arouses my ire. So if you don’t want my ire to be aroused, you’d better write it correctly. And another one that bothers me, too, is the word comic book. People always write it as if it’s two separate words. But to me, if it’s two separate words, then it means a funny book — a comic book. If you write it as one word, which is the way I do it, then it’s a generic term meaning a comicbook! So I feel everybody ought to write comicbook as if it’s one word, because it doesn’t mean funny book.

Q: Out of all of the Oscar-deserving cameos you’ve made in movies like The Avengers and Iron Man, which is your favorite? — Bryson H.

A: You haven’t seen it yet, but I think my favorite is going to be the one that I did for Iron Man 3, which will come out, I hope, next year. It’s very funny. You will have no difficulty spotting it in the movie. I think it’ll get a lot of laughs. I do a little more acting in this one than I’ve done in any of the others. In fact, I’m practically the co-star of the movie, although it only takes about 7 or 10 seconds to do the whole thing.