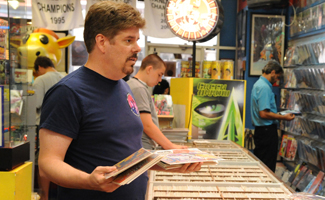 If you’re a fan of comic books and comic memorabilia, you’ve no doubt been amazed by the remarkable items seen on Comic Book Men as they’ve been bought and sold at Jay and Silent Bob’s Secret Stash. On his personal blog, Michael Zapcic is providing his expert perspective on the merchandise seen on Comic Book Men during Season 2, which thus far has included several rare comic books, a baseball signed by the cast of the ’60s Batman TV show, and a case of Kryptonite rocks. Which of these items from the first eight episodes of Comic Book Men Season 2 do you think is the coolest?