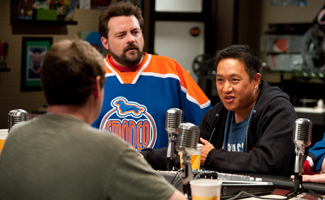 This week, Kevin Smith chats with Examiner.com and Indiewire, and also talks to ComingSoon.net about the origins of Comic Book Men. Plus, Ming Chen tells Hollywood.com that comic books aren’t just for kids, and recaps and reviews of Comic Book Men Season 2 Episode 8, “Stan The Man.” Read on for more:

• Kevin Smith sits down with Indiewire to reflect on his long career.

• Examiner.com interviews Kevin Smith about his ability to attract fans with more than just his movies.

• Kevin Smith tells ComingSoon.net about the origins of Comic Book Men and how he really wanted a reality show for the geek community.

• Kevin Smith reveals to Indiewire why he prefers The Avengers to The Dark Knight Rises.

• Ming Chen talks to Hollywood.com about everything from comics to what to expect from Bryan Johnson in future episodes of Comic Book Men.

• USA Today reports on the news that Comic Book Men will return Thu., Feb. 14 at 9/8c, as do Indiewire and ComicBook.com.

• For recaps and reviews of Comic Book Men Season 2 Episode 8, “Stan The Man,” check out ComicBook.com, ScienceFiction.com, and The Two Cents.