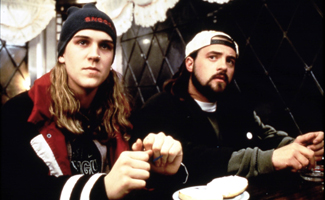 During Season 2, Episode 7 of Comic Book Men, “Tough Sh*t,” Kevin Smith stops by the Secret Stash to sign copies of his latest book for a huge crowd of fans, one of whom shows off a large Jay and Silent Bob tattoo on his lower back. While you’re probably not quite that devoted to the hilarious pair, it’s a good bet that you’re a fan of Clerks., Mallrats, Jay and Silent Bob Strike Back, and other movies that feature them. So which one do you like best?