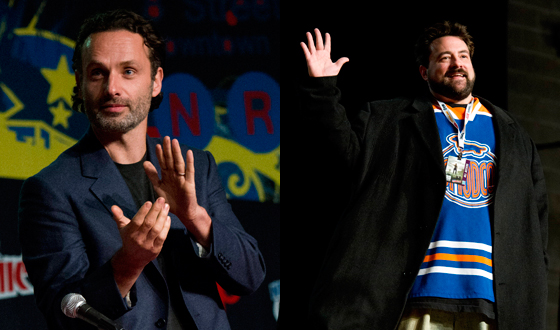 Before last night’s premieres of The Walking Dead and Comic Book Men, members of their casts and crews appeared at the 2012 New York Comic Con to provide fans with a look at what’s to come during the shows’ new seasons.

At Saturday’s The Walking Dead panel, Executive Producer Robert Kirkman and much of the cast previewed Season 3 for a rabid crowd. While the show will feature new threats from the living this season, Kirkman and the cast reassured fans that there still will be plenty of zombie action. “We kind of hit the ground running, and it just kind of goes from there,” said Kirkman of the season premiere’s non-stop zombie butchery.

No character has made himself more ready to battle zombies than Carl Grimes, who delighted fans by blowing away his first zombie in the early minutes of the Season 3 Premiere. When asked if Carl is turning into an awesome killing machine, Chandler Riggs responded enthusiastically, “Oh yeah! It’s really cool for me to play more of a dark character.”

There was some action during the panel itself, too: During the audience Q&A, Andrew Lincoln (Rick Grimes) and Norman Reedus (Daryl Dixon) leaped off the stage to check out one fan’s The Walking Dead tattoo, which covered her entire calf.

Reedus navigated his fair share of flirtatious comments and implied that fans shouldn’t expect his character to be proactive about the brewing chemistry with Carol (Melissa McBride). “I just think that Daryl has no game,” says Reedus.

The newcomers spoke too: Danai Gurira, the actress tasked with playing the sword-wielding, pet zombie-toting Michonne, described her character as much more than a survivor. “Michonne is a thriver,” she said. “To get from pre-apocalyptic to post-apocalyptic… you either do or you die. And her choice to ‘do’ was a very intense and powerful choice that allowed her to recreate herself into a formidable force in this realm.” And while the dashing David Morrissey, the Brit who plays The Governor, was mostly tight-lipped about his character’s introduction this season, he did reveal the inspiration behind his portrayal of The Governor: “Robert [Kirkman] wrote a fantastic book called the Rise of the Governor. That’s what I based my Governor on.”

As the panel drew to a close, one fan asked how everyone’s role had changed since the beginning of the series, and how they took that evolution on as actors. Lincoln gave one of the most revealing statements of the evening: “The second season was for me was very much a struggle for leadership. And this season, the show opens up and you
have a clash of two camps and two men and two ideologies… The zombies sort of become less of a threat than the actual human threat. And I’m certainly going to the dark side this season. I go crazy, and I’m still kind of there.”

Friday’s Comic Book Men panel was equally entertaining. Regarding the the show’s second season, Executive Producer Kevin Smith joked, “Having a little bit of success under your belt is always a shield against the sh*tters.”

Smith kicked off the event with a reel of highlights from Season 2, including the Comic Book Men’s ill-advised plan attempt to host kids birthday parties in the store to make money seen in the Season 2 Premiere. The reel’s standouts were undoubtedly the superhero wedding between Michael Zapcic and Ming Chen (which Bryan Johnson joked was a “lifelong dream” of his) and a visit to the Secret Stash by the legendary Stan Lee.

The boys discussed the making Season 1, which store manager Walt Flanagan admitted was “fun” to film. Flanagan also admitted that he didn’t find the courage to watch the show until three episodes in — and that he liked what he saw. “The fact that he ate a bowl of Comic Book Men and said, ‘it’s not bad’ is pretty damn cool,” noted Smith.

The panel was then turned over to the fans, one of whom asked the guys to name their favorite Batmobiles. Johnson chose the Batgirl’s Batcycle and Chen chose The Dark Knight‘s Tumbler (Smith joked that Chen would have to sit on phonebooks to see out of the beefed-up car.) When another fan asked what superhero they’d be, Flanagan got a laugh by saying Smith would be be Professor X because he “just sits around talking.” Johnson, for his part, chose Rick from The Walking Dead.

When asked about the most common misconception about comic-book fans, Smith and the boys defended fanboys’ place atop the cultural food chain. Smith noted that considering the huge throngs of people at Comic-Con and the recent box-office success of movies like The Avengers and The Dark Knight Rises, comic fans have little to be self-conscious about. “We rule it now,” Flanagan surmised. “Every form of entertainment that’s huge is comic-book-related.”