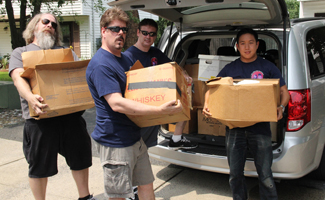 This week, Kevin Smith visits Larry King’s Larry King Now and talks about hosting AMC Fearfest. Plus, ScienceFiction.com chats with the Comic Book Men cast about changes in the comic business. Read on for more:

• Entertainment Weekly features a clip of Kevin Smith speaking to Larry King and notes that Smith has a lot on his plate, including Comic Book Men.

• Kevin Smith sits down with AMCtv.com to discuss his gig as AMC FearFest’s host.

• ScienceFiction.com talks with the cast of Comic Book Men about changes in the comic business at New York Comic Con.

• Examiner.com reports Kevin Smith will be a spotlight guest at the 2013 Chicago Comic & Entertainment Expo.

• For additional recaps and reviews of Season 2, Episode 1, “Stash Bashes,” check out Comic Booked and ScienceFiction.com.