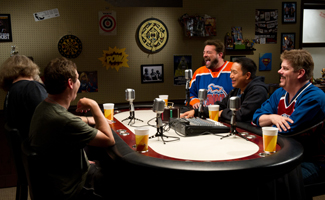 This week, the cast of Comic Book Men hits New York Comic Con 2012, and Kevin Smith chats with NPR. Plus, Examiner.com talks with Walt Flanagan. Read on for more:

• Kevin Smith and his Comic Book Men crew visited New York Comic Con 2012 for a panel held in front of a full house. Gamezone, which calls the show “refreshingly hilarious,” was there, as were Hollywood.com and AMCtv.com.

• NPR‘s WNYC chats with Kevin Smith about the genesis of Comic Book Men.

• Examiner.com interviews Walt Flanagan about his “obsession” with heavy metal.

• Check out ComicBook.com for a review of the Season 2 premiere, “Stash Bashes.”