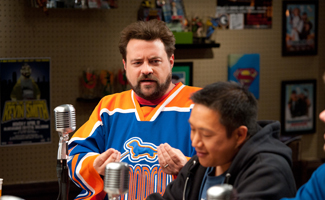 This week, The New York Times reports on Stan Lee’s Comic Book Men appearance, and Kevin Smith recommends his favorite films and TV shows to NPR. Plus, Wired chats with Michael Zapcic. Read on for more:

• Kevin Smith shares his movie and TV recommendations, including The Walking Dead and Talking Dead, with NPR.

• ScienceFiction.com‘s Season 2 preview notes that “the guys are the same old lovable fanboys we’ve come to know. And yes, Ming is still the butt of most of the jokes.”

• Hollywood.com features an exclusive photo from Season 2, commenting, “Take a moment to absorb the awesomeness. Then get ready for some serious nerdiness this October.”