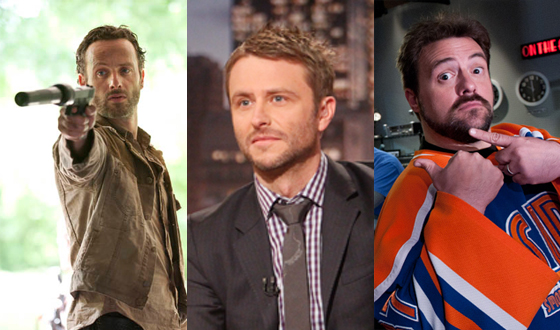 AMC announced from Comic-Con 2012 in San Diego, CA, the premiere of The Walking Dead Season 3 on Sun., Oct. 14 at 9/8c. As previously announced, the series’ third season will consist of 16 episodes. Season 3 will air in two-parts with the first eight hours kicking off Oct. 14 and returning Feb. 2013 with the final eight episodes. Following The Walking Dead will be the season premieres of AMC’s Talking Dead, hosted by Chris Hardwick (Nerdist), at 11/10c Comic Book Men at 11:30/10:30c. Season two of both series consists of 16 half-hour episodes. Internationally, The Walking Dead will return to audiences in 120+ FOX International Channels (FIC) markets the week of October 15, as part of FIC continued commitment to broadcast the series near date-and-date globally.

The season premieres of The Walking Dead, Talking Dead and Comic Book Men will coincide with the network’s annual blockbuster marathon of thriller and horror films, AMC Fearfest. Celebrating its 16th year, AMC Fearfest will feature 19 consecutive days of themed programming and more than 70 films, running from Sat., Oct. 13 through Wed., Oct 31.