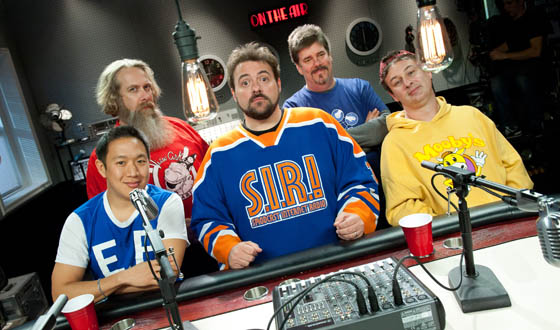 “Pinch my fat ass, ’cause I must be dreaming! A thousand thank you’s wouldn’t cover the gratitude I’m feeling right now. And as you might imagine, everyone at SModcast Pictures is in love with everyone at AMC today! Rest assured, Walt, Bry, Mike, Ming and I are suited up and ready to hit the ice for our second season with Team AMC,” said Smith.

“AMC set out to build shows around authentic characters and original worlds, and Comic Book Men really delivers on both of these. Charlie Corwin and Kevin have created a truly unique show that is funny and informative — whether you like comic books or not; and the guys from The Stash are the kind of real life experts we always wanted to build the show around,” said Joel Stillerman, AMC’s EVP of original programming, production and digital content. “Talking Dead is just great synergy and it gives our audience a destination to continue the conversation about The Walking Dead. We are thrilled that Chris is back to lead the discussion. He is genuinely knowledgeable about the genre, and truly entertaining.”

“Talking Dead has been an amazing experience and I cannot pile enough hugs and thanks onto AMC for renewing it. I CAN’T WAIT for Season 3 of Walking Dead, so that we can finally talk about Rick meeting [SPOILER] and [SPOILER]-ing him with a heavy-duty [SPOILER] at the [SPOILER]. And let’s not forget all the rest of the [SPOILER]s getting in on the action! [EXPLETIVE] me! It’s going to be great…,”said Hardwick.

Comic Book Men allows viewers to see the Secret Stash’s staff and customers geek out over mind-blowing pop culture artifacts and the legends behind them. Leading the crew behind the Secret Stash counter are moody manager Walt, uber-nerd Mike, career slacker Bryan and Ming, the shop’s go-to whipping boy. As the team buys, sells and discovers the treasures of the comic collecting world, they share all the juicy details with Kevin through their outrageous podcast, which is woven throughout the series. AMC’s season one of Comic Book Men reigns as the most engaging reality program on television.*

Talking Dead features Hardwick spending time with fans, actors, producers and TV enthusiasts, recapping that most recent Dead episode, and taking questions and com amc_renews_talkments from viewers. Fans may continue to engage with the after show following the on-air conclusion, online, at www.amc.com for more conversations, questions and trivia.