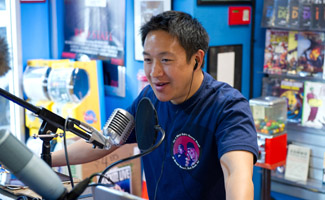 Ming Chen is the Secret Stash’s jack of all trades, taking care of the tasks that no one else can or will do. He spoke with AMCtv.com about the day for which he still thanks Kevin Smith and being ridiculed for his comic book tastes by his co-workers.

Q: When Kevin Smith told you he was going to make a show at the Secret Stash, were you in right away?

A: I’m pretty much on board with anything he wants to do, never mind that he signs my checks. This was definitely something I was on board with. I think he sent me an instant message one morning, saying, “Listen, this is gonna sound weird, but we’re thinking of doing a TV show at the comic book store.” It’s pretty crazy, the paths that Kevin takes you on if you hang out with him long enough.

Q: What were some of the reasons it appealed to you?

A: A show about three guys that I hang out and joke with about stupid things like comics, TV, movies, and pop culture? We do that anyway — to do it in front of a camera where everyone else can see it, and maybe somewhat validate it, I thought that might be exciting. I never had any aspirations about being on TV at all, but it sounded like fun.

Q: Did he give you any advice on how to act naturally in front of the camera?

A: No, not really. I think he just kind of knew it was going to work out. I think he knew we’d be prepared for something like this, where you kind of have to be quick, where you can’t have gaps between conversations and you can pull funny things out of thin air.

Q: Have you ever been in any of Kevin’s movies?

A: He’s thrown me into a couple movies as an extra. The most notable one was in Dogma: I’m sitting right next to Jay and Silent Bob and watching Salma Hayek take her clothes off. It’s pretty hard to top that, I have to admit. That was a pretty cool day at a seedy strip club in Pittsburgh. I’m still thanking him for that.

Q: You met Kevin through your Clerks fansite, right?

A: Yeah, I created a Clerks website when I was in college. I was bored. Every so often great things come out of boredom, and that was one of them. It was online for about a month and he ended up giving me a call asking me to create a site for his production company. And here I am now.

Q: After all this time, is it still cool to work with someone you’re a fan of?

A: Yeah, absolutely. I try to tone the fan-dom down a little bit, but it’s definitely a fun reason to wake up in the morning. I know a lot of people are not really fans of their boss in any way shape or form, so it definitely makes it easier.

Q: In Episode 4, you suggest Zombie Day at the Secret Stash. Are you a big zombie fan?

A: Absolutely. Probably one of my favorite comics currently is The Walking Dead. I know zombies are trendy right now, but the comic and the direction The Walking Dead TV show has taken is fantastic.

Q: What’s the most heated debate you’ve gotten into with the guys at the shop?

Q: You’re known as the guy who does the stuff no one else wants to do. What’s the most unusual task you’ve been assigned?

A: About a year ago, I was asked at the last minute — I mean literally, the last minute — to take a road trip up to Maine to hand deliver a DVD copy of Red State to a Time magazine journalist. I had to drive up to Maine, sit at her house, watch it with her, and then take it back and make sure that nobody else got access to it.