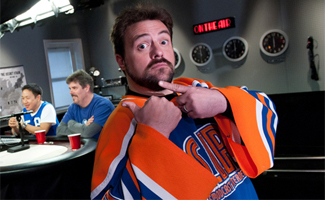 This week, Kevin Smith reveals how getting kicked off a plane eventually led to the creation of Comic Book Men. Plus, Smith will be featured in an upcoming documentary about Comic-Con International. Read on for more:

• Kevin Smith tells the McClatchy-Tribune News Service about how being asked to get off a plane eventually led to the creation of Comic Book Men: “Getting kicked off that plane, I can find a line directly to the AMC show.”

• Kevin Smith is featured in the trailer for Morgan Spurlock’s documentary, Comic-Con Episode IV: A Fan’s Hope, which documents “the cultural phenomenon that is Comic-Con International.”

• 411mania.com reviews Comic Book Men, observing that “the fact that [Kevin Smith] takes part in each episode and weighs in on any given argument or situation is kind of cool.”

• For recaps and reviews of Episode 3, “Commercial,” check out ScienceFiction.com and TV Geek Army.