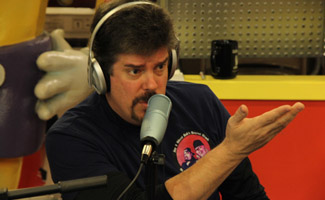 Comic Book Men‘s Michael Zapcic helps run the Secret Stash and hosts the podcast I Sell Comics! In this interview with AMCtv.com, he talks about the public perception of comic book culture, his most prized collectible, and the dirty secret in Superman’s past.

Q: How much did your I Sell Comics! podcast prepare you for being on TV?

A: Surprisingly it helped a lot, except there are cameras in your face. When you’re doing a podcast, the Internet has the advantage of allowing most people to be at least a little anonymous. But once you’re out in front of the camera, pretty much all bets are off.

Q: Were you able to get to a point where you forgot the cameras were there?

A: We didn’t so much forget the cameras were there, but we were able to use them to our advantage as far as being able to tell a story. If you talk to Bryan [Johnson] or Walt [Flanagan], they’ll tell you I tell a looong story. It’s just the way my mind works. I don’t go from point A to point B, I have to take the scenic route. I found myself censoring me a little bit. Not even censoring, just being very aware that you don’t have a lot of time and you gotta get as much information out as you can in a short period of time. I learned how to be less boring, or at least I hope I did.

Q: What are some common misconceptions of comic book culture that the show dispels?

A: That people who enjoy comic books are basically overweight nerds who live in their parents’ basement. I would have to say that 95% of our customers aren’t that guy — we’re not the comic book guy from The Simpsons. A lot of them are intelligent and hold down fairly well-respected jobs. We have a customer who is a psychiatrist who reads comic books on the fly. Even he is a little spooked by being typecast as a comic book nerd.

Q: What are some common perceptions the show will confirm?

A: That most of us comic book nerds are really passionate about what we like and what we dislike. We are very opinionated. And knowledgeable.

Q: Rumor has it you know everything about comics. What’s the most obscure piece of knowledge you have that would shock most people?

Q: What’s your most prized piece of memorabilia?

A: It would have to be a Superman statue that my wife bought me for, I believe, our first wedding anniversary. It has sentimental value through the roof. It goes for about $200, but the sentimental value makes it priceless to me. That’s the one thing I would never sell.

Q: Where did she get it?

A: Oddly enough, at the Secret Stash. She went behind my back to Walt to get it.

Q: What’s the weirdest collector’s item you’ve ever seen in the shop?

A: Walt got his hands on a Spider-Man asthma inhaler. It was British, and they thought that maybe it could remove some of the stigma of being asthmatic for British children. I hope that’s what they thought, rather than, “Wow, we’re gonna make a million bucks off all the asthmatic kids in Britain.” Walt got his hands on it, I believe, in 2002, and it stayed in here for about six months. Then someone with asthma came in and bought it. I didn’t check to see if they were British or not.

Q: In the first episode, you’re pretty impressed with the Bob Kane drawing of Batman. Has a customer ever brought something in which you bought for yourself?

A: Yes, actually, there was a time or two that I have purchased things for myself. Never behind the Stash’s back, but I bought some comic books to fill in some holes in my collection. I bought a run of Ultimate Spider-Man comics, and I think The Walking Dead #1. It flew under everyone’s radar because it’s a smaller print company — Image Comics at that time was not as big as it is now, and a lot of stuff fell through the cracks.

A: Does my wife count? Always cover my bases. If it has to be a four-color heroine, I like what Kevin [Smith] did with the Black Cat. That’s kinda weird that I’m focusing on feline ladies.

Q: You mentioned you have kids. Do they love comic books, too?

A: They love their cartoons and they’re slowly getting into comic books. Neither one has the same passion I did when I was their age. But you know what? I still love them.