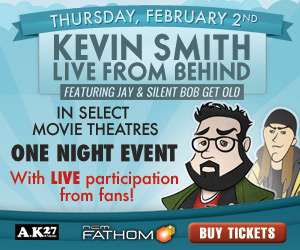 Kevin Smith, director, writer, podcaster, and executive producer of AMC’s upcoming series Comic Book Men, will discuss anything and everything when he takes over the silver screen for his show Kevin Smith: Live From Behind, a live, one-night-only event happening in select movie theaters nationwide on Thu., Feb. 2 at 9:30PM ET / 8:30PM CT / 7:30PM MT / 6:30PM PT / 9:30PM Alaska and Hawaii. Tickets are on sale now but going fast — click here for a complete list of theater locations  (theaters and participants are subject to change), and visit FathomEvents.com, AK27Productions.com, or participating theater box offices to get your tickets today!

Originating from the Scotiabank Theatre in Toronto, Ontario, this special live three-hour event will begin with Smith and frequent co-star and long-time friend Jason “Jay” Mewes hosting their highly-rated podcast, Jay and Silent Bob Get Old. The evening will then switch gears as Smith takes the stage to tackle a wide variety of topics and issues during a live, fan-generated Q&A with movie theater audiences across the country. For the first time, fans will have the opportunity to drive the conversation as they submit questions and interact with Smith in real time via various social media networks throughout the unique, “tell it like it is” stage show. Presented by NCM Fathom and AK27 Productions, the event will be broadcast live to more than 300 select movie theaters across the country through NCM’s exclusive Digital Broadcast Network.

“Doing something like this means you can get the event into a theater in a very small town. We may have never been to that small town, but we can be with this Q&A event,” said Smith. “I can be like ‘Hey man, I’m going to be on the screen soon, pop into a theater and check it out.’ That’s kind of magical. The very ability to do that on a wider level now, instead of just doing it one night only in this city, in this theater… I look forward to it!”

“Since the release of his debut film in 1994, Kevin Smith has been a veritable force in the entertainment industry,” said Dan Diamond, senior vice president of NCM Fathom. “Fans won’t want to miss this unique stage show, as well as their chance to interact with him live from the comfort of their local theater.”

Smith is a screenwriter, actor, film producer and director, as well as a popular comic book writer, author, comedian/raconteur, and Internet radio personality best recognized by viewers as Silent Bob. He is most famous for his cult film catalogue including Clerks, Mallrats, Chasing Amy, Dogma, Jay and Silent Bob Strike Back, Jersey Girl, Clerks II, Zack and Miri Make a Porno, and his newest film Red State, which premiered at the 2011 Sundance Film Festival. Smith also sports three DVD releases of his various college Q&A’s (An Evening With Kevin Smith, An Evening With Kevin Smith 2: Evening Harder, and A Threevening with Kevin Smith), as well as an EPIX Original Q&A special (Kevin Smith: Too Fat For 40). Smith has also published two books full of essays and blog postings, Silent Bob Speaks and the New York Times bestseller My Boring Ass Life, as well as Shootin’ the Sh*t with Kevin Smith, a collection of the best material from SModcast, Smith and producer Scott Mosier’s weekly podcast at www.smodcast.com.