This browser is supported only in Windows 10 and above.
Broken Trail 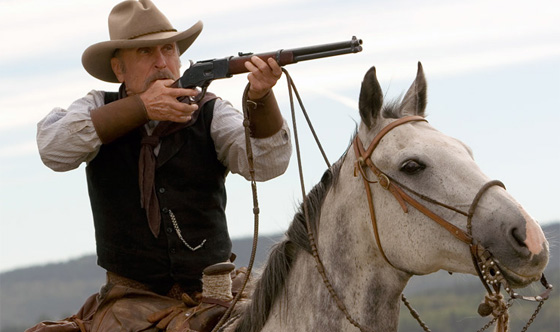 Award-winning actor Robert Duvall has left his footprints all over the Wild West. Watch Lonesome Dove and you’ll see an actor radiating dependability and timeworn wisdom! But the actor’s early Western career narrates a different history… one of lawlessness, corruption, and murder! Say what you want about Duvall’s Western career, but he can hardly be accused of playing the same character over and over again. Just take a look at this rap sheet…

Broken Trail (2006)
In this critically-beloved miniseries that comes courtesy of AMC (ahem), Duvall shrugs off the delinquency of his past to follow the cowboy code, and passes with flying colors. While he’s ferrying a shipment of horses across the frontier, Duvall rescues five Chinese women being used as sex slaves. It seems like that the women don’t take kindly to being referred to by numbers, but it’s clear that Bobby’s heart is in the right place.

Open Range (2003)
Duvall here plays “Boss” Spearman opposite Kevin Costner. He’s a crusty old coot — a type Duvall perfected in his late career — who wants to preserve the frontier’s open range. In a way, Duvall’s old-timer reminds us of another late period performance: John Wayne’s portrayal of Rooster Cogburn, Duvall’s nemesis in True Grit. The similarities even extend to injuries. Duvall fractured his ribs during the filming, a feat that the Duke matched in a mishap during lensing of The Undefeated.

Lonesome Dove (1989)
Yes,
there’s a long gap between Duvall’s last Western and this one. (Perhaps
there was some prison time in the interim, providing ample time for
reflection?) As former Texas Ranger Gus McCrae, he appears older and
wiser, but be warned: Duvall’s still plenty rough around the edges.
That means rustling some cattle south of the border before he heads out
partner Tommy Lee Jones to their new spread in Montana. But the real
reason to watch this flick is Duvall’s performance — one of his best
ever.

The Great Northfield Minnesota Raid (1972)
Duvall
descends further into the abyss of depravity as one of the biggest
bandits of all time, Jesse James. And, no, he’s not one of those nice,
happy-go-lucky James boys popularized by Henry Fonda and Tyrone Power.
Nope, in this gritty revisionist Western, Duvall’s as cold as they
come. His character is an unrepentant, money-hungry killer who won’t
blink an eye when it comes to extinguishing a human life, and Duvall
nails it.

Joe Kidd (1972)
If you ever find yourself in a Western, don’t join a posse. Have you seen The Ox-Bow Incident or Hang ‘Em High
lately? Posses are bad news! No wonder Clint Eastwood’s bounty hunter
refuses to join up with Duvall’s group of good ol’ boys. His reluctance
proves wise when Duvall’s evil land-grabber starts using Mexican
villagers for target practice. It’s a role tailor-made for Duvall at
this point in his career.

True Grit (1969)
A
must for die-hard Duvall fans, the actor’s first ever Western
appearance comes as notorious outlaw Ned Pepper. Pepper is as
unscrupulous as they come, abandoning one of his own during a shootout
with John Wayne’s Rooster Cogburn and showing there’s no honor among
thieves. Nevertheless, when Duvall proves a surprising gentle kidnapper
— of 14-year-old Mattie Ross — it hints at the possibility of reform,
and showcases his already impressive acting range.

Lawman (1971)
Duvall’s
second offense? Murder. Extenuating circumstances? Sure. He was drunk.
It was an accident! To make matter worse, Duvall refuses to take
responsibility for his actions, bartering with unyielding marshal Burt
Lancaster. Critics and audiences alike loved Duvall as the unrepentant
law-breaker at the heart of the tale. Chances are you will too.