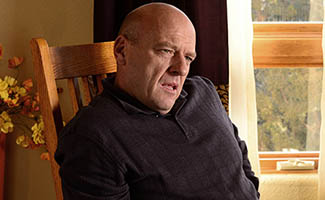 This week, the Los Angeles Times examines the rise of character actors like Dean Norris, while WhatCulture is eager for Vince Gilligan’s Battle Creek. Plus, International Business Times recommends binge-watching Breaking Bad. Read on for more:

• The Los Angeles Times lauds the rise of the character actor, citing Dean Norris as an example.

• Vince Gilligan’s Battle Creek, debuting March 1 on CBS, is one of WhatCulture‘s most anticipated TV shows of 2015 because “it’s the new series from Breaking Bad’s Vince Gilligan.”

• International Business Times advises catching up on all five of Breaking Bad‘s seasons (available on Netflix) ahead of Better Call Saul‘s February premiere.

• Chicago’s WTTW interviews Marius Stan, who talks about his Breaking Bad experience, as well as the similarities between science and moviemaking.

• Entrepreneur advises Breaking Bad superfans to head to Albuquerque for a vacation.

• One of the six web series that The Wall Street Journal is keeping an eye on is Tightrope on Crackle because Bryan Cranston is producing the comedy.

• NY1‘s Broadway review cites All the Way as one of 2014’s top 10 productions, declaring it was Bryan Cranston’s “stunning turn that turned this one a huge winner.” The Irish Times was also impressed by “Bryan Cranston’s utterly gripping Lyndon Baines Johnson.”

• According to Forbes, one of the great films that didn’t get the audience it deserved in 2014 was Decoding Annie Parker, which has a “murderer’s row cast” including Aaron Paul.

• Uproxx looks at 10 actors who guest-starred on The X-Files before they became famous, including Bryan Cranston, Aaron Paul and Dean Norris.