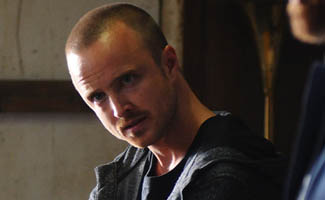 • Aaron Paul has introduced a new app that’s named after his Breaking Bad catchphrase, “”Yo B*tch,” according to CNN.

• MStars has a clip of Krysten Ritter on Jimmy Kimmel Live talking about reuniting with Aaron Paul backstage and what it was like to choke to death on Breaking Bad.

• RJ Mitte writes in The Huffington Post, “I wouldn’t be in the position I am in today without my disability and be able to utilise what I know about living with CP [cerebral palsy] for my role in Breaking Bad.”

• According to The Hollywood Reporter, Kate Powers, one of Breaking Bad‘s script coordinators, has received a Writers Guild of America nod for co-writing an episode of SundanceTV’s Rectify.

• ComicBook.com says that Krysten Ritter has nabbed the lead in Marvel’s A.K.A. Jessica Jones, a Netflix series that will debut next year.

• Emily Rios has been cast in Season 2 of HBO’s True Detective, Deadline reports.