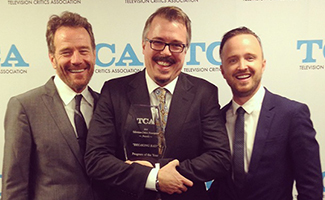 This week, Breaking Bad is all over the news with its second consecutive win at the Television Critics’ Awards, while Sundance looks back at Anna Gunn’s best TV roles. Plus, Times Higher Education spotlights Walter White in the anti-hero phenomenon. Read on for more:

• Brand-E reports that Breaking Bad tops the list of “Most Binge-Watched” television shows, along with AMC’s very own The Walking Dead.

• Irish Independent includes Breaking Bad on its list of “The Top 10 Most Shocking Character Deaths.” For those binge-watching now, beware of spoilers ahead.