On Saturday evening, the Television Critics Association announced the winners for the 30th Annual TCA Awards, and Breaking Bad was named Program of the Year for the second consecutive season. Breaking Bad  is the only show in the history of the TCA Awards to accomplish this feat. Series creator Vince Gilligan and stars Bryan Cranston, Aaron Paul and RJ Mitte were at the ceremony to accept the award (see backstage photo below).

Breaking Bad‘s competition for Program of the Year included HBO’s True Detective and Game of Thrones, CBS’s The Good Wife, and Netflix’s Orange is the New Black.

The 2014 TCA Awards are presented by the Television Critics Association, which consists of over 200 critics and journalists. 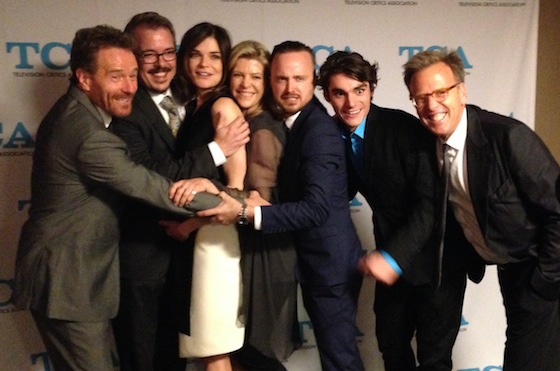