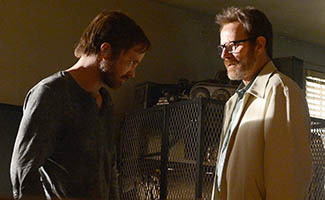 This week, The Sydney Morning Herald asks Vince Gilligan about the pressure of ending Breaking Bad, while Giancarlo Esposito describes Gus’s death. Plus, The Wire thinks Bryan Cranston will get a Tony nod for playing President Lyndon Johnson. Read on for more:

• Vince Gilligan speaks with The Sydney Morning Herald about wrapping up Breaking Bad and how he “felt a huge amount of pressure to end this thing right, more creative pressure than I’ve ever felt about anything I’ve ever done.”

• Talking to The Vancouver Sun, Giancarlo Esposito calls Gus’s demise “probably one of the most visually satisfying and emotionally gratifying deaths in film history.”

• The Wire predicts that Bryan Cranston will be nominated for a Tony Award for best lead actor in a play, for his role as LBJ in All the Way.

• Speaking of which, The Boston Globe reports that Bryan Cranston was honored with an Elliot Norton Award (Boston’s version of the Tonys) nomination for outstanding actor for All the Way.

• Also, Bryan Cranston has been nominated for an Outer Critics Circle Award for outstanding actor in a play, according to Variety.

• According to The Hollywood Reporter, Bryan Cranston tells a Tribeca Film Festival audience about connecting a “villain” with viewers: “The more complex a character is and the more honest a character is depicted, I think it touches people and it resonates through them, and it was done very craftily.”

• Bob Odenkirk tells The Independent he doesn’t know what will happen on Better Call Saul, but he’s “just planning to act my pants off, that’s really my only plan.”

• GQ wonders if Breaking Bad should have ended in a bloodbath, leaving everyone in the cast dead.

• The Houston Chronicle features a gallery of actors who have played Texans, including Bryan Cranston — who’s playing President Lyndon Johnson on Broadway.

• See Bob Odenkirk at Cinema Blend in a trailer for upcoming episodes of FX’s Fargo.