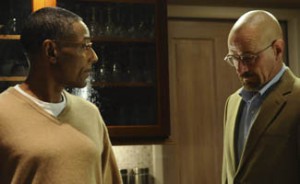 This week, CBS News and NPR interview Bryan Cranston, while Breaking Bad is honored with a Peabody Award. Plus, Anna Gunn will be off-Broadway this summer. Read on for more:

• Talking to CBS News, Bryan Cranston — who’s playing President Lyndon Johnson on Broadway in All the Way — reflects on the civil rights legacy of the 36th president, saying, “He went against the norm in a time, in the early ’60s, when he just as easily could’ve just let it be the status quo.”

• NPR interviews Bryan Cranston, who says his appearance enables him to be “more chameleon-like, as opposed to, let’s say, Jon Hamm, who is this handsome, striking, black-haired, chiseled-looking guy.”

• Variety reports that Anna Gunn has been cast in an off-Broadway play called Sex With Strangers that will be directed by David Schwimmer.

• Time‘s list of the most shocking TV deaths includes Hank and Gus.

• One of Rolling Stone‘s best TV moments last year was Walt paying Robert Forster’s character to play cards with him: “For Walter White, this is what his whole criminal empire comes down to – hiring a fellow crook to make him feel like a regular guy for a few minutes.”

• Wired highlights a graph that shows high viewer ratings for Breaking Bad and a strong upward progression for each season: “By ending every season stronger than it started, Breaking Bad never left fans disappointed.”

• Digital Spy thinks Walt lost the sympathy of viewers when he let Jane die in Season 2, calling it “the starkest turning point” for Breaking Bad‘s anti-hero.

• Breaking Bad‘s fans span the globe. The Huffington Post reports that Israel’s Maccabi Tel Aviv football team unfurled a banner during a game that said “I’m not in danger, I am the danger.”

• Mashable spotlights a fan’s paintings of Walt that each reveal “a different side of his personality; a different story for every important person in his life.”

• According to Omaha’s WOWT, RJ Mitte brings his anti-bullying message to Creighton University and credits Breaking Bad for filling up the auditorium: “I wouldn’t have the platform without Breaking Bad. I wouldn’t be able to come do this.”