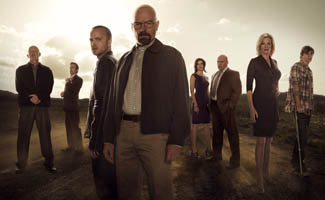 The University of Georgia’s Grady College of Journalism and Mass Communications announced today that Breaking Bad has been selected to receive a Peabody Award. This year’s eclectic list of 38 recipients, ranging from Netflix’s House of Cards to the BBC America’s Orphan Black, represents what the University calls “the best in electronic media.”

“Through a stunning brand of visual storytelling and meticulous character development, we were able to explore the darkest chambers of a human heart in a way never before seen on TV,” the presenters said of the AMC drama. “Over five seasons, Vince Gilligan made good on his promise to utterly transform Walter White from Mr. Chips into Scarface.”

The 73rd Annual Peabody Awards will be presented at a ceremony in New York City’s Waldorf-Astoria Hotel on May 19.

For more on the awards, visit the Peabody Awards website.