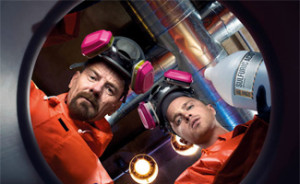 This week, Bryan Cranston compares his newest character, President Lyndon Johnson, with his most well-known, Walt and Jonathan Banks is cast in a new movie. Read on for more:

• According to The Wall Street Journal, Bryan Cranston, starring on Broadway as Lyndon Johnson, says the 36th president and Walt were “both very powerful, strong-willed, smart, damaged. In both cases, ego had a large part of what downfall they had.”

• Jonathan Banks has been cast in Term Life, a crime thriller to be directed by Peter Billingsley, according to The Hollywood Reporter.

• Hypable taps Aaron Paul as a future Oscar nominee, calling him “one very busy man, jumping from project to project and covering almost every genre on the way.”

• Talking about playing President Lyndon Johnson in All the Way, Bryan Cranston tells the Associated Press, “You only make your Broadway debut once and I’m encouraged that I hitched my wagon to a really well-written play.”

• Aaron Paul turned up on Top Gear in a Reasonably-Priced Car challenge — and broke the BBC Two show’s speed record, according to Entertainment Weekly.

• Aaron Paul guest-hosted WWE Monday Night Raw and “looked as happy as he did at his wedding — which is why we love him,” says Entertainment Weekly, which has some video of the event.

• Bill Burr tells the Ottawa Citizen, “I owe my acting career to [Vince] Gilligan and the writers and everybody else attached” to Breaking Bad.

• What Culture posts “a tribute to the under-appreciated, overlooked, and underrated episodes that helped make Breaking Bad a modern masterpiece.”

• Describing his new movie, Need for Speed, to Ireland’s Independent.ie, Aaron Paul says, “What’s so great about this film is it’s not just a car movie, but it’s a throwback to the classic car culture films.”