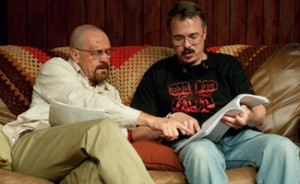 This week, Breaking Bad and Vince Gilligan make it onto Adweek’s Hot List, while Gilligan is one of Made Men’s 2013 Men of the Moment. Plus, Skyler and Jesse are now popular baby names. Read on for more:

• Made Man does a video interview with Vince Gilligan as part of an end-of-the-year program honoring outstanding men’s achievement.

• More parents are naming their children “Skyler” and “Jesse” because of Breaking Bad, according to Sky News.

• Yahoo TV interviews Peter Gould about Saul’s genesis, how “we needed a voice for the lightness of the show, but we also needed someone who really knew the underworld.”

• HitFix offers an all-Breaking Bad podcast, which includes a “discussion of the overall greatness of the series and where it might fit into the Pantheon now that it’s done.”

• Breaking Bad is honored with four Satellite Award nominations, according to The Hollywood Reporter.

• The New York Times‘s round-up of complete TV series on DVD — for “the completists, the binge viewers and the difficult-to-buy-for relatives who do nothing but watch TV” — includes Breaking Bad.

• DVD Talk‘s review of the final season’s Blu-ray calls it “the strongest season of television I’ve seen in… perhaps ever.”

• Yahoo TV watches No Half Measures, the documentary about the making of Breaking Bad, and shares 15 things it learned.

• Bustle is thankful this Thanksgiving for nine TV characters, including Jesse, “by far the most-loved person on Breaking Bad.”

• Courtesy of the Daily Mirror, check out an “amazing” Breaking Bad-themed graffiti art piece that’s currently on display in London.

• According to The Hollywood Reporter, Laura Fraser has been cast in a BBC drama called Castles In The Sky that stars Eddie Izzard.

• We Are Movie Geeks spotlights the poster for Cold Comes the Night, which stars Bryan Cranston and opens Jan. 10.

• Ireland’s entertainment.ie has a video of a voice actor and impressionist who imagines Jesse re-cast as Gandalf in The Hobbit.