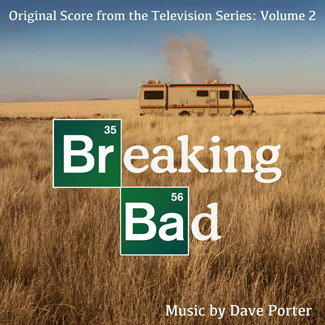 Madison Gate Records and AMC’s Breaking Bad: Original Score From The Television Series Volume 2 is heating up the iTunes Store as of Fri., Sep. 27. The original soundtrack, featuring previously unreleased original music by Dave Porter from across the Emmy Award-winning and critically-acclaimed television series, serves as a fitting postlude to the critically acclaimed television phenomenon, which airs its Series Finale Sun., Sep. 29 at 9/8c on AMC.

“This weekend’s finale of Breaking Bad is the end of a six year adventure for me,” Porter comments.  “It has been such a privilege to be a part of it. I’m thrilled to have the opportunity to release a second volume of my original score from the series…. It gave me a chance to include a few earlier tracks that I originally missed, as well as my favorites from Season 5.”

“With so much great music written for the series, one album just didn’t do it justice,” adds Shelly Bunge, a Madison Gate Records executive.  “We’re happy to bring to the fans of the show a second volume of original score from the talented Dave Porter.”

Dave Porter studied classical and electronic music composition at Sarah Lawrence College, and started his professional career at Philip Glass’ studio in New York City. Dave is the series composer for the Emmy-acclaimed drama Breaking Bad on AMC, for which he scored all 62 episodes.  He has been awarded an ASCAP Film and TV award for Breaking Bad as well as the FOX Studios paramedic drama Saved, which aired on TNT. He was the composer for the ABC series Red Widow, the feature documentary Bigger, Stronger, Faster, and the horror film, Smiley. Next, Dave will compose the M. Night Shyamalan series Wayward Pines for FOX, coming in 2014.

Breaking Bad: Original Score From The Television Series Volume 2 is available now on the iTunes Store. In addition, on Tue., Nov. 26, Sony Pictures Home Entertainment will release the Breaking Bad Blu-ray Collector’s Edition Complete Series Set, featuring an all-new, two-hour documentary, along with more than 55 hours of special features and commemorative memorabilia in a replica barrel. Breaking Bad: The Final Season will also available on Blu-ray and DVD Tue., Nov. 26.