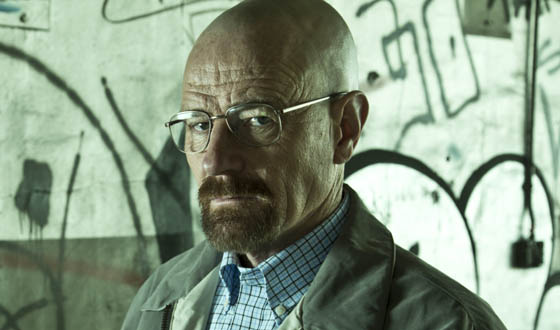 The Museum of the Moving Image in Astoria, NY will present “From Mr. Chips to Scarface: Walter White’s Transformation in Breaking Bad,” an exhibit featuring costumes, props, and video material from the highly acclaimed AMC television series. The exhibit will open on Fri., Jul 26. in the Museum’s core exhibition Behind the Screen, and will be on view through Sun., Oct. 27. On Sun., Jul. 28, the Museum will present Making Bad: An Evening with Vince Gilligan, Breaking Bad’s creator– a special program featuring video clips about the evolution of the show and White’s character. See below for ticket prices and description.

Advance tickets for the Vince Gilligan event are available online at Museum of the Moving Image or by calling 718-777-6800.

Among the objects on view are several costumes worn by Cranston: the yellow Oxford shirt and khaki pants typical of White’s daily wear; the black pork pie hat, black jacket and pants, and green shirt favored by White’s alias, Heisenberg; the briefs worn by White during his first methamphetamine-making session, and the hazmat suit, gas mask, apron, and boots used in subsequent “cooking” scenes. Props include those relating to White’s cancer treatment–pharmaceuticals, PET scan, strands of loose hair (the result of his chemotherapy)–as well as objects featured in pivotal scenes in the series, including the pink teddy bear and Walt Whitman’s Leaves of Grass. Also on view will be selected clips from the series, and behind-the-scenes footage.

“We are thrilled to present material from this extraordinary and compelling television series, appropriately located in the ‘Actor’ section of the Museum’s core exhibition, Behind the Screen. The exhibit explores how Breaking Bad‘s filmmakers used a variety of visual cues to convey Walter White’s transformation, including shifts in costume color palette and a series of symbolic props, and features many of the key costumes and props that helped communicate White’s character development over the course of the series,” said Barbara Miller, the Museum’s Curator of the Collection and Exhibitions, who organized the Breaking Bad exhibit.

Vince Gilligan is the creator, producer, and frequent writer and director of Breaking Bad. Writing in praise of the series in The New York Times, James Atlas wrote, “I watch Breaking Bad for the same reason I read the classics: to discover why people act the way they do. Also, it’s colossally entertaining.” Gilligan will talk about the creation and evolution of the series, and of Walter White’s character, in this conversation accompanied by video highlights.

Tickets: $20 public / $12 Museum members / free for Silver Screen members and above. Tickets include admission to the Museum. Advance tickets for the Vince Gilligan event are available online at Museum of the Moving Image or by calling 718-777-6800.