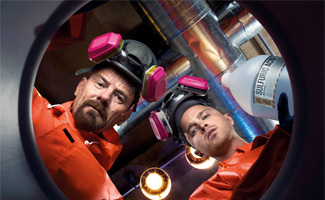 This week, Emmy speculation surrounds potential nominees Bryan Cranston, Aaron Paul, Anna Gunn, Jonathan Banks, Dean Norris and Bob Odenkirk, while Cranston is set to receive a star on the Hollywood Walk of Fame next week. Plus, RJ Mitte discusses the impact of cerebral palsy on his life and career. Read on for more:

• Digital Spy reports that Bryan Cranston will get a star on the Hollywood Walk of Fame on July 16, with Aaron Paul set to pay tribute to him at the ceremony.

• Los Angeles Magazine bids farewell to Breaking Bad: “Nobody would have expected Breaking Bad to become the best crime show ever, and with just eight more episodes to go, nobody can imagine life without it.”

• RJ Mitte talks to The Daily Mail about growing up with cerebral palsy and shares that a Season 1 episode where Walter, Jr. is taunted hit home because “I was a prime target for bullies.” Mitte also does another interview where he talks about dealing with CP in Hollywood.

• Monsters and Critics reports that New York City’s Museum of the Moving Image will present “Making Bad: An Evening with Vince Gilligan” at the end of the month, as well as an exhibit titled “From Mr. Chips to Scarface: Walter White’s Transformation in Breaking Bad.”

• WhatCulture provides its list of the best episodes of Breaking Bad, “the greatest television show of our age.”

• Home Media Magazine favorably reviews the Season 5 Blu-ray and calls Breaking Bad “one of the smartest, most tightly written shows currently on TV.”

• SF Weekly reports that a limited number of Walt’s Heisenberg porkpie hats will be made by a San Francisco-based hat maker (that made the original hat for the show).

• Dean Norris discusses with the Los Angeles Times the enigma that is his new film, The Counselor, directed by Ridley Scott and written by Cormac McCarthy.

• The Huffington Post showcases artist Hanksy’s depiction of Walt as a bald eagle, in honor of Independence Day. Uproxx points out that the work of art is called “Walter Flite.” Also, Mashable reimagines Walt as Benjamin Franklin.

• In addition to the Breaking Bad panel, Bryan Cranston will also be found at Comic-Con’s Godzilla panel on July 20, the Los Angeles Times reports. Meanwhile, Dean Norris will be part of the Under the Dome panel.