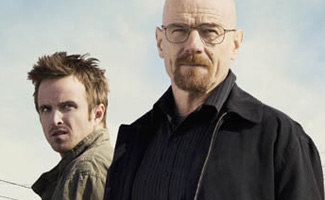 This week, Gold Derby has an online chat with Aaron Paul, while Vince Gilligan pays tribute to James Gandolfini in The Hollywood Reporter. Plus, Anna Gunn talks to both the Los Angeles Times and The Guardian. Read on for more:

• In The Hollywood Reporter, Vince Gilligan says, “Without Tony Soprano, there would be no Walter White,” and reflects on James Gandolfini’s warmth and friendliness.

• Anna Gunn tells the Los Angeles Times her favorite episode of the series to date is Season 5’s “Fifty-One” because “it showed such a broad range of emotions from Skyler.”

• TV Guide learns from Vince Gilligan that Breaking Bad‘s first episode back will contain an homage to Star Trek.

• Entertainment Weekly compiles a likeability index of characters — including Walt, Jesse, Skyler, Marie and Saul — that “make us question who we’re rooting for and why.”

• Deadline asserts, “There are very few shows that are as groundbreaking as Breaking Bad“ and thinks it deserves to win at least one best drama Emmy before going off the air.

• MediaPost‘s choice for the best drama Emmy is Breaking Bad (“a series as dark and unsettling as any ever produced for American television”). MediaPost also thinks the “crazy-talented” Bryan Cranston deserve the lead drama actor award.

• Deadline speaks with Michael Slovis, the show’s cinematographer, who says that Breaking Bad uses “a more traditional film approach rather than television.”

• The Tampa Bay Times quotes Dean Norris saying, “It’s great to play the only guy on the show who didn’t break bad. All he wanted was a clean soul.”

• Dave Porter, Breaking Bad‘s composer, tells Yahoo to expect a “call back to some musical motifs first expressed in previous episodes” during the show’s final run.

• What Culture concludes that Breaking Bad is “the best TV show I have ever seen,” citing the drama’s visuals, acting and “moral questioning.”

• USA Today features a new Breaking Bad app that enables users to have their name appear with elements from the periodic table, just like in the show’s opening credits.

• Celebuzz, highlighting a TV spot promoting the final batch of Season 5 episodes, confesses, “I still get tingles when I hear Heisenberg talk about the empire business.”

• CarterMatt.com describes the new poster for the series’ final episodes as “ominous, creepy, and a not-so-subtle reminder that Walter White still believes himself to be the most important man in the room.” Crave Online, Digital Spy, The Hollywood Reporter, The Huffington Post, NBC News, New York, TheWrap and Zap2it also spotlight the artwork.

• Indiewire reports that Giancarlo Esposito will receive a star on the Hollywood Walk of Fame.

• Betsy Brandt’s new series, The Michael J. Fox Show, will debut on NBC on Sept. 26, according to RedEye.

• According to A.V. Club, an Albuquerque brewery is coming out with a Breaking Bad-inspired beer called “Heisenberg’s Dark.”