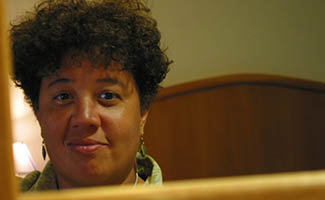 Breaking Bad editor and podcast host Kelley Dixon talks about having to keep Walt’s secrets on the podcast and her favorite edits from the show.

Q: You’ve edited many of the big meth montages throughout the series, going back to the Pilot. What makes you such an expert on the visuals of meth-making?

A: I’m not an expert at all on meth-making! [Laughs] Even when I cut the first montage in the Pilot I didn’t even know what order the steps were supposed to be in. I freaked out a little bit, because I didn’t want it to come out wrong. I was assured that the steps were shot in order, so I just looked for visually interesting shots and cut them together. Then I messed around with speed of them and jump-cutting them, and it ended up that Vince [Gilligan] just loved it.

Q: Have you done any montages for the upcoming season?

Q: What sorts of shots do you look for when editing your episodes?

A: Vince really likes wide shots. He likes things to look very cinematic and not at all like television. So we don’t use a lot of close-ups on peoples’ faces, which you see a lot of in television. Instead, we like to use shots that are more complex with people in the foreground as well as the person we’re focused on. Then even if you do see a closeup on the show, we’ll cut back to a wider shot so you can see more of what’s happening. And that’s really unique.

Q: You host the Breaking Bad Insider Podcast. Is it hard to keep spoilers from slipping out during those conversations?

A: Before we start a podcast, we’ll kind of have a summary about what happens — especially if the actors are here, because it could be months since they’ve done the episode. In Season 4, right before they blew Gus’s face off, in the penultimate episode, we had to go with the whole ruse that Walt was not lying to Jesse about poisoning Brock. We thought, OK, we should go ahead and pretend that all of this is true, knowing full well that in the next podcast we were going to admit we were lying the whole time. In that one especially we had to catch ourselves a few times.

Q: You’ve worked with so many images and scenes on the show. Which is your favorite?

A: In Episode 508, during the prison montage, there was a shot of a guy in prison where he was caught behind a door. A prison door slammed on him, and you can see him through the window. These other guys are coming up on him and they start to stab him with these little shivs, but you only see them through the window, and this guy banging on the glass with his bloody hand and then we cut to Walt’s face, a profile. That was one of my favorite cuts. It wasn’t that flashy, but it meant a lot. In one shot it’s showing how Walt is the guy behind all this mayhem. And he’s very calm. Those are the kind of things that I’m trying to do.

Q: How has editing changed for characters like Walt, who have transformed so much over the course of the show?

A: Cutting scenes in general hasn’t changed that much. With Jesse and Walt, nowadays they’re kind of at odds with each other, and they tend to argue more than they agree, so I try to keep them both in the shot rather than use clear close-ups of them.

Q: Have you ever pulled any pranks on Vince in the editing room?

A: At the end of Season 3, right after Jesse shoots Gale and it cuts to black, instead of showing the card that says “Executive Producer Vince Gilligan,” right before he watched it for the first time I’d taken his credit and replaced it with a line that says “To Be Continued…” in a typewriter style font, just like they did on The X-Files. He got a good laugh at that. The other one was in Episode 306, which opens with a Native American in a police car. It was a very different opening than we usually have, so I added a little description text to the bottom of the screen that said “Navajo Reservation” like they did all the time on The X-Files. That episode was written and directed by another X-Files vet, John Shiban, so they both got a kick out of that.