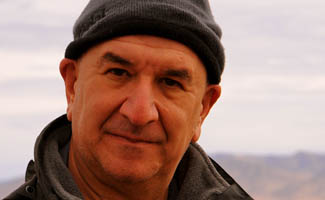 Breaking Bad‘s longtime cinematographer and episode director Michael Slovis talks about directing the cast for the last time and his favorite shot ever in the show’s history.

Q: Now that you’re shooting the final eight episodes of Breaking Bad, are you starting to feel pressure?

A: Well there’s a lot of pressure from many directions that we actually haven’t felt before on the set. This set is a very congenial easy-going place to work for the most part. The last eight episodes, however, are bigger-conceived, bigger stories — there’s a lot more action. There is also a wistfulness running through the cast and the crew right now, that indeed we are in the last episodes and that after this we’re going to go our separate ways.

Q: As a cinematographer, are you approaching these last eight episodes in any different visual way than you have the previous four seasons?

A: Vince and I have always talked about a descent into darkness. And in terms of an overall palette it’s really dark. It doesn’t mean you don’t see stuff. It means that there are a lot of blacks in the frame; it’s contrast. One of the advantages of shooting a show for five or six years is that we know who these characters are. So I don’t need to light their faces up all the time. If a bald head that’s around six foot walks into a room, you know it’s Walt. We all know who these people are, so it gives me a lot more freedom than I may otherwise have.

Q: Over the years Breaking Bad has become known for its signature shots — its desert vistas, its POV shots. Do you have a checklist for what you need to pay tribute to before the series ends?

A: That’s such a good subject, and I could talk about this for hours because I am not always the biggest fan of those shots. I think they work best when they’re sparingly used. If they are there all the time then you kind of expect it and the impact of it is greatly diminished. But if it comes at a time when you least expect it — when we are conditioned as an audience to see things in a certain way like television and film viewers — it’s special. My favorite example is in the Season 3 opener that Bryan [Cranston] directed, where we cut very, very wide when one of the Cousins shoots the guy who was driving the immigrants across the desert. As opposed to going to a great big close-up of a gun and seeing that big thing burst into our face, we hear a tiny little pop. I think that’s the best example of using something that’s unexpected to great effect.

Q: You directed one of the final eight episodes. What was that experience like?

A: The beauty of the episode that I directed was that it was lots of revelations. It was our characters in real time finding out new and interesting things. If you look at this last grouping of eight, I think in some ways this episode was the crest of the hill that pushes all the other stories further and I really like that.

VIDEO: On the Set of the Final 8 Episodes

Q: Do you prefer those kinds of episodes to the more action-heavy ones?

Q: What sorts of things does Breaking Bad do that can’t be shown anywhere else on TV?

A: It’s not that they can’t, it’s just that we do it so well. And we do it well because of the writing. As a cinematographer that’s what I’m interested in. I want people to look at it and say it’s pretty, but I don’t want people to look at it and say “Whoa, the photography dominated what I’m looking at.” What I love about working on this show is that the acting, the story is so strong, so fully grounded, on a solid foundation of drama that it even stands up to very strong photography. And therefore I do it. I’ve worked on shows where we’ve covered up weaker stories. It’s not fun. It’s boring. I would much rather work on something where there’s a great story to be told.

Q: You directed an episode of AMC’s Hell on Wheels. Since Vince Gilligan has always called Breaking Bad a modern-day Western, did you notice any parallels between the two shows?

A: Well first of all, Hell on Wheels was so much fun. Can you imagine being like a boy and seeing twenty-two Indians approaching and riding through town and looking at dead animals and mud and people puking and bodies — I mean, come on! It’s like a dream come true. But, as a guest director it’s not my job to go there and say, “This is what we do on Breaking Bad.” That said, I did keep things wide. We were on this beautiful reservation and I really wanted to show it. I have an affection for wider lenses which include actors in their surroundings, so if there’s anything like that, that’s what I do. But I don’t think I have a particular way I would shoot a Western.

Q: After five seasons on Breaking Bad, if you could pick one shot as your favorite, which would it be?

A: You’re asking me to pick a favorite child. I can’t do it! Many people have tried. Actually, one of my favorite shots is one of the simplest and it was nothing special, from a photographic point of view. But it was the shot of the single close up of Bryan when he let the Krysten Ritter character die, when he makes that decision. I just thought, “That’s cinema. That’s everything film should be.”

Q: What about it was so perfect?

Q: Knowing everything you know about the lives these characters on Breaking Bad have led, is there any character’s life you wouldn’t mind assuming?

A: It certainly wouldn’t be Walt’s. [Laughs] You know, this is such a dysfunctional bunch I think that I would rather maintain my functionality and general humanity than descend into what any of these people… these people are not good people. Maybe baby Holly. Maybe she has it all in front of her and she’ll forget.