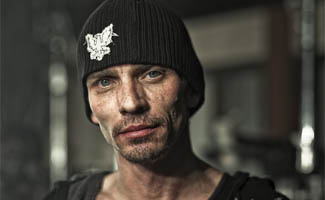 Charles Baker, who plays Skinny Pete on AMC’s Breaking Bad, describes how he revealed his hidden musical talent on set and shares the one thing he has in common with his character.

Q: After five seasons, are you an expert at playing a drug addict?

A: [Laughs] It’s challenging — that’s what I love about doing Skinny Pete. However, when I get offers from people saying, “Hey play this druggie character in a show,” I now say I want to do something new. I have a five-year-old daughter and a nine-month old son, and at some point I’d like them to be able to watch something I’m in before they’re in college!

Q: Do you ever read what people write about the show and your character?

A: I do happen to read the internet message boards for Breaking Bad. After that episode in the beginning of Season 5 people were commenting, “Wow, turns out that guy is actually an actor.” I wonder what they thought I was before! When I played that song, Solfeggietto in C minor, on the keyboard, that apparently threw a lot of people for a loop.

A: I had heard one of the writers in a previous season say that they kind of listen to the actors off-camera to get clues about special talents or quirks they have. When we were shooting a Narcotics Anonymous scene a while back, the location was in an old church. During our break, I decided to take a minute to sit down and jam on the piano. Some of the writers were nearby and one of them heard and came by. They spent a season-and-a-half figuring out how they were going to be able to use it. They asked me what songs I could play and I sent them a list of songs. I practiced like a madman for the rest of the month!

Q: Do you think you and Skinny Pete have any overlap in your musical tastes?

A: When they shoot the scenes, they never actually play the music that Skinny Pete is listening to. He seems like a pretty hardcore rock and hip-hop kind of guy, he probably goes back and forth between the two. I’m more of an acoustic folk kind of dude. My guess would be that Skinny Pete is probably a bit of a closet classical music fan. But he probably won’t admit that to himself anymore, much less anyone else. It kind of shows the idea that Skinny Pete hasn’t always been Skinny Pete. I think it’s kind of a sad and beautiful statement; there was a time when he might have been a person with potential and talent, before something happened that turned it around.

Q: Have you found you have anything else you have in common with Skinny Pete?

A: We have somewhat different tastes. We do wear the same belt. The one that Skinny Pete wears, it’s my favorite belt. I’ve worn it since high school. It’s about the only thing we have in common.

Q: Have you changed anything in your approach to the show over the past five seasons?

A: Shortly after Season 2, I stopped reading the whole script. I’d just read my own scenes, and I’d just try and avoid the rest so I could watch it with my family and friends and find out what’s happening along with all the other fans. I live in Texas, so I’m kind of removed from the show and show business completely. It’s almost surreal: When I watch the show, I barely even recognize myself as Skinny Pete. And then I go on set, it’s almost like time travel for me. It’s really kind of a neat experience. In the terms of the show, it’s only been about a year, year-and-a-half, and it really feels like that on set.