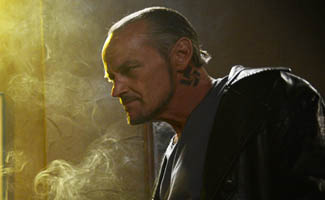 Actor Michael Bowen, who plays Todd’s uncle Jack on AMC’s Breaking Bad, talks about the real life hit-man who inspired his performance and discusses some unfinished business he has with Aaron Paul.

Q: Jack is a pretty tough dude. Have you ever known anybody like him?

A: Deadly serious, quiet-types of people? I’ve met a few of those. I’m not saying names; I grew up in San Francisco and it’s obviously quite different, but I was surrounded by a lot of interesting characters — revolutionary-type people. For this Jack character I had to do some stuff to learn about how someone gets to this state, being a calculated sociopath.

Q: Did you model Jack on anyone in particular?

A: I was thinking about Richard Kuklinski, who they called “The Iceman.” He was a contract killer on the East Coast for the mob, meanwhile he was maintaining an entirely upper middle class, family life, with children, a wife, and a home. And if you watch, “The Iceman Tapes”, which you can find on YouTube, Richard Kuklinkski has this kind of quiet confidence. And a lot of the inspiration I got for the character was from him. It’s not about miming the guy per se, but it was about absorbing this calm, frighteningly matter-of-fact air he has when describing horribly vicious things.

Q: You’ve played a few badasses in the past. How does Jack stack up?

A: I’ve played quite a few, but he’s probably the baddest I’ve played. He doesn’t need to say anything and you know that it’s dead serious. It’s the polar opposite of who I am. I grew in a very liberal family. My mom was Jewish, my dad was like living with the great Santini who was a hippie. I get home now and it’s like I better do the dishes, or fix my wife’s car. I have girls — I have 5-year-old girl, I have a 20-year-old girl, I have an 18-year-old girl, a 15-year-old boy. They and my wife run the show. It’s pretty funny.

Q: You co-starred with Aaron Paul in The Last House on the Left—

A: Aaron actually murdered me in South Africa in [that movie]!

Q: Do you harbor fantasies that Jack would take revenge on your behalf?

A: You know, I didn’t even see Aaron on set. I saw him on the airplane with his fiancée. He asked me where I was going and I told him; he was really excited. But Jack’s very capable…

VIDEO: Making of Episode 508, “Gliding Over All”

Q: Jack tries to tell Walt his plan to kill ten guys in two minutes isn’t doable… then he caves and gets it done. Have you ever had a similar experience, where someone talked you into doing something you thought was impossible?

A: I mean, I’ve discovered things on motorcycles that I didn’t know I could do for one… Oh, and I’ve been convinced by my wife that there are certain dishes that I’m actually able to wash!