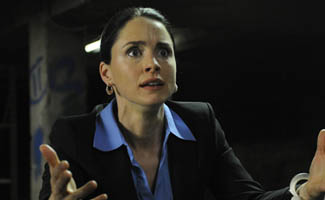 Scottish actress Laura Fraser, who plays Lydia Rodarte-Quayle on AMC’s Breaking Bad, talks about the most intimidating actor on-set, theorizes what a Scottish version of the show would look like and explains why she can’t walk into Apple stores any more.

Q: Lydia seems constantly on the verge of death. Were you worried that she was going to get knocked off?

A: Oh yeah, absolutely. They told me I was going to be in more after the first half of the season, but I thought they could change their mind pretty easily and I could be gone.

Q: Who did you find to be the most intimidating person on-set?

A: I found Jonathan Banks the scariest. My very first scene was with him and I was incredibly nervous myself. With him kind of playing that scary character opposite me, there was a level of fear that was real. And I hadn’t had a chit-chat with him really before it. With Bryan Cranston, when I watch the show he’s extremely sinister and frightening. But chatting with him before acting with him, he’s just hysterical.

Q: Jonathan Banks has said that Mike is responsible for his own downfall for not following his own rules and killing Lydia. What’s your take on that?

A: I didn’t read that, but I remember him on set saying, “What the f***? No half-measures! What am I doing?” But, you know Mike f***ed up. He took a half-measure, what can I say? I felt sad when I heard what happened — I left at Episode 505 and came back at Episode 508 expecting to see him there, and then realized that his character had died the previous episode. I was a bit bereft because I was looking to get to know him a bit more!

Q: You’re from Scotland and talking to you now, I hear a strong accent. How did you master Lydia’s American accent — and her unique way of speaking?

A: Well there was a description from Vince Gilligan that said, “Low and fast.” That’s how she talks. And I knew that he wanted a nervous energy from her, and whenever I started speaking as her, it just sort of came out. I thought, “This is kind of odd, but I like it!” She breathes really fast and light from the upper-chest, and she doesn’t really like to take deep breathes from her diaphragm. That type of breathing helped, too.

Q: Is your temperament similar to Lydia’s in any way?

A: I’m sure my husband would tell you that I’m extremely similar to Lydia, but I beg to differ! I am pretty highly strung myself, but I’m not as bad as she is. I can be quite fearful about things, so I just used my own fear about various situations and put it into every scene that Lydia has done.

Q: How was the role first explained to you and what attracted you to it?

A: I was told somehow her personality seems to match her name — Lydia Rodarte-Quayle — and even in that little description it seemed to tell you a lot about her and her uptightness and energy. But I think Lydia is a hoot. Even when she is terrified and backed into a corner, she’s remarkably cheek,. like when she has the audacity to ask for a cut of the money from the train heist.

Q: Given the show’s popularity, have you lost a bit of anonymity in the States now?

A: It’s really strange. I’m in upstate New York, and it hasn’t really happened up here. But whenever I go into Manhattan, people come up to me all the time. Especially you get concentrations of Breaking Bad viewers in places like the Apple Store or anything to do with computers, it seems. So it happens a lot with that demographic.

Q: What would a Scottish version of Breaking Bad look like?

A: There are certainly gangs in Scotland, but thankfully there are less guns. So it would be more knives. A few more people would be alcoholics, too — maybe Walt.